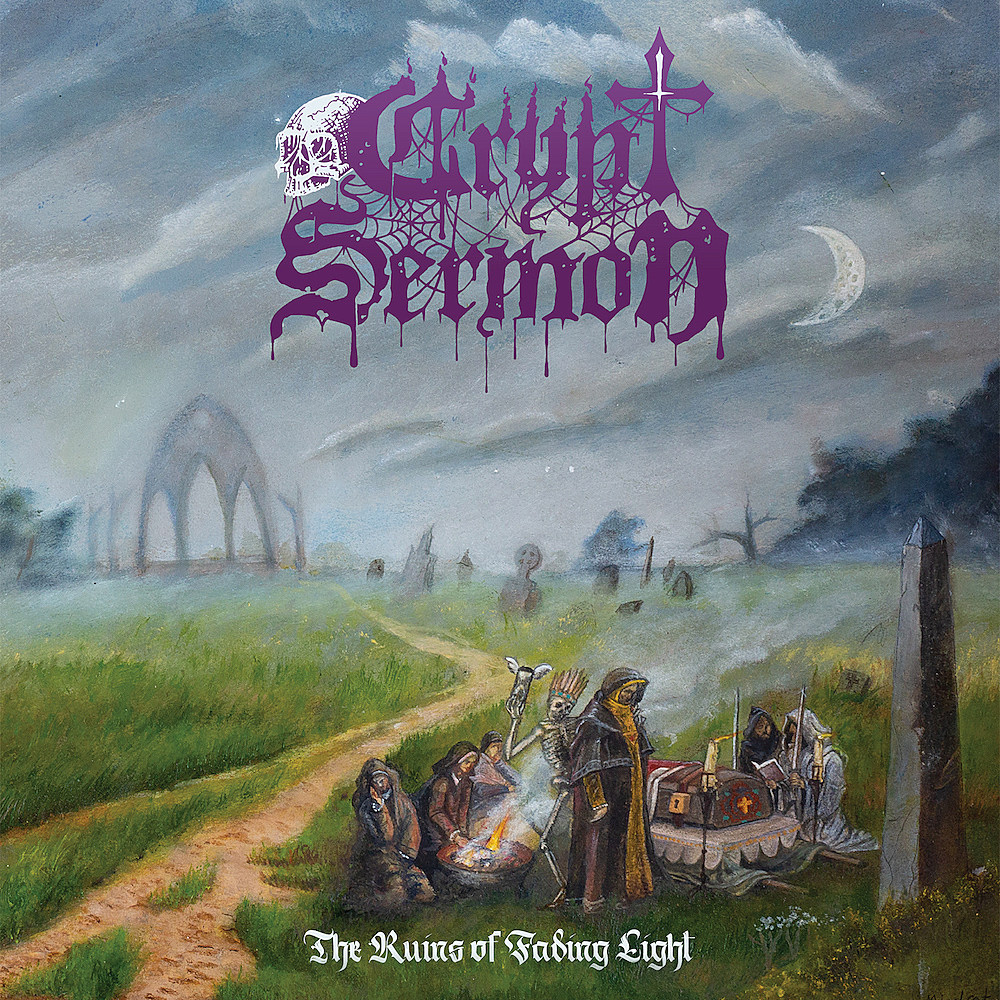 It's a holiday week so there's a little less here than usual, but the new Immortal Bird and Abbath albums are out today (both of which I reviewed for Notable Releases, and they're also embedded below), and the 'Riffs For Reproductive Justice' comp came out this week with tons of great new metal and hardcore songs. You can also read about new albums from Sanguine Eagle, A Pregnant Light, Jute Gyte, and more over at Invisible Oranges' Upcoming Metal Releases, and this week we got new singles from Crypt Sermon, No One Knows What The Dead Think (ex-Discordance Axis), Uniform + The Body, Aura Noir, and more. Read on for all the metal we posted on BV this week...

Modern doom greats Crypt Sermon have finally announced a followup to their beloved 2015 debut Out of the Garden. It's called The Ruins of Fading Light and due September 13th via Dark Descent, and going by lead single "Key of Solomon," it sounds like their knack for making addictive, trad-style doom is as strong as ever.

NO ONE KNOWS WHAT THE DEAD THINK - "YORHA"

NJ grindcore greats Discordance Axis broke up back in 2001, and since then vocalist Jon Chang started Gridlink (who are now also on hiatus) and drummer Dave Witte did lots of stuff. Now, Chang and Discordance Axis guitarist Rob Marton have reunited to form the new band No One Knows What The Dead Think (with drummer Kyosuke Nakano of Cohol, Abort Mastication, and Defiled), and their debut single “Yohra” is a real scorcher. It sounds like Jon Chang and Rob Marton still have that chemistry they had back in the day, and it’s nice to hear Rob riffing again. Their debut self-titled album comes out September 20 via Willowtip Records.

Last year, genre-defying heavy bands Uniform and The Body released the collaborative album Mental Wounds Not Healing, and now they’re already set to release another album together, Everything That Dies Someday Comes Back, on August 16 via Sacred Bones. You can read more about lead single "Penance" here.

Photographer Peter Beste's new photo book Defenders of the Faith: The Heavy Metal Photography of Peter Beste "documents the timeless and universal concept of fandom through the elevation of the battle vests, revering them beyond the sweaty bodies they adorn and the mosh pits they live in, to the status of religious artifact." The book has a foreword by Biff Byford of Saxon and it comes out September 27 via Sacred Bones, along with a two-song 7" with new music by Norwegian bands Black Magic and Aura Noir. The Aura Noir song is out now, and as you might expect from this band, it's an awesome dose of thrashy black metal. You can read more about the book and pre-order it here.

Scorpios Androctonus' long-running black metal project Crimson Moon will release their fourth album Mors Vincit Omnia on August 30 via Debemur Morti Productions, and new single "Godspeed Angel of Death" features guest vocals by Lord Angelslayer of Archgoat and Proscriptor McGovern of Absu. "'Godspeed - Angel Of Death' is a hymn towards the Destroying Angel, with sword drawn and dripping with gall... The omnipresence of death in a sonic soundscape accompanied with the guest vocals of Lord Angelslayer (Archgoat) and Proscriptor McGovern (Absu) that grants the obolus to the listener to embark on the journey towards the underworld," says Androctonus.

THOU - "IN THE PINES" (LEADBELLY/NIRVANA COVER)

There's a lot to dig into on Riffs For Reproductive Justice, but one we wanted to shine a little extra light on is Thou's "In The Pines" (aka "Where Did You Sleep Last Night") a cover of Nirvana's version of Leadbelly's version of the song. Thou have done a lot of great Nirvana covers, and this nine-minute, sludgy cover of what started as a traditional folk song is among their most interesting re-interpretations of that band's music.

Abbath's anticipated sophomore album is out now via Season of Mist. You can read my review here.

Immortal Bird's genre-defying Thrive On Neglect is out now via 20 Buck Spin, and you can read my review here.