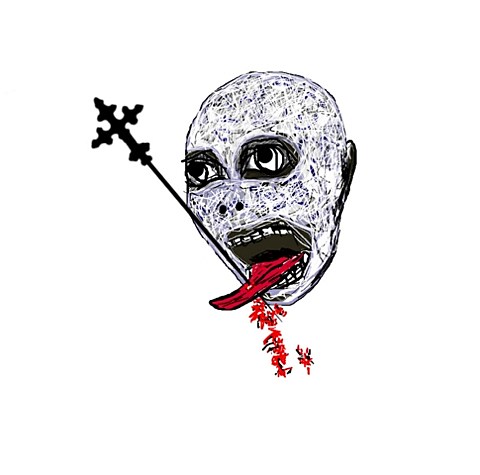 Chicago avant-punks ONO released two albums in the '80s before disappearing and not resurfacing with a third until 2012's Albino. It was released by Moniker Records, who wrote the following at the time:

To non-locals, ONOs stunning Albino might have fallen from the sky, but to an enlightened and ever-growing bunch of Chicago heads the band is already full-on legend, and the release of their first recorded music since 1986 is a majorly epic landmark that needs no introduction. For the rest of yall: ONO is a unit of transcendent noise-making now in its fourth decade. Both notorious and neglected in their early years, ONOs unholy bitches brew of noisy snarl, avant-garde R&B, gospel-heavy blackness, queer sensibility and extravagant, performance-art theatrics (they once played a concert at Navy Pier in which singer travis was dragged through the audience in a steel cage, naked but for a jockstrap) was in a whole nuther galaxy from the macho Chicago punk scene that spawned them. Reemerging in the late 00s with astonishing vehemence and an expansive, multi-generational lineup, theyve been embraced by a more fertile and experimental Chicago scene, and are about to explode skulls internationally.

This week, Moniker will release ONO's followup to Albino, Spooks. It's very very weird stuff, with just enough snarl that it still makes sense to call it "punk." We've got the premiere of the full album stream and the video for "Ma LaVeau." Check it all out below.

ONO have some shows coming up too. They aren't playing NYC, but they're playing the very cool Boston Hassle Fest which goes from November 5-7 and also includes Flipper with David Yow (who play NYC on Halloween), Screaming Females, Terrence Dixon, Downtown Boys, Container, Pile, Guerilla Toss, and ex-Battles member Tyondai Braxton. Tickets are on sale.