"Rip to the greatest hip hop producer of all times.... Larry Smith. Produced my biggest and most significant hits." - Rev Run 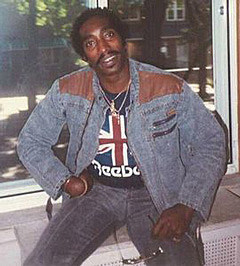 Hip hop producer / musician Larry Smith, the man behind the sound of Run DMC's "It's Like That" and "Sucker MCs" as well as early singles by Whodini, Kurtis Blow (he co-wrote and played bass on "The Breaks" and "Hard Times") and others, has died at age 63. He suffered a dibilitating stroke in 2007 which left him voiceless, partially paralyzed and bedridden since. Last month, Ebony published an "unsung legend" feature on Smith, interviewing Run-DMC's Darryl "D.M.C." McDaniels and Kurtis "Kurtis Blow" Walker and others. Said McDaniels:

He was a musician. Even today, you have beat makers and producers who are musicians. The best producers are musicians and DJs. Anybody can make a beat. I could make a beat and then put lyrics on it and it could become a record, but I'm not a musician. Larry knew music. What separated Larry way back then and what allowed him to make all those hits was the fact he was a musician. Run and I used to tease him because he talked like a musician. The jazz, blues, and rock musicians all call each other "cats." We would use our hip-hop slang, and he would always use his musician slang. Run and I were irresponsible little kids. We would giggle when he would say "other cats." We were like, "What the hell is he talking about?" But he was a musician. He could produce blues, rock, gospel, R&B, and hip-hop.

Read the rest of the feature here. Rest in peace, Larry.

Maybe Run DMC will have some sort of tribute for him at their Barclays Center show tonight (12/19). A few of Larry Smith's productions can be streamed below...