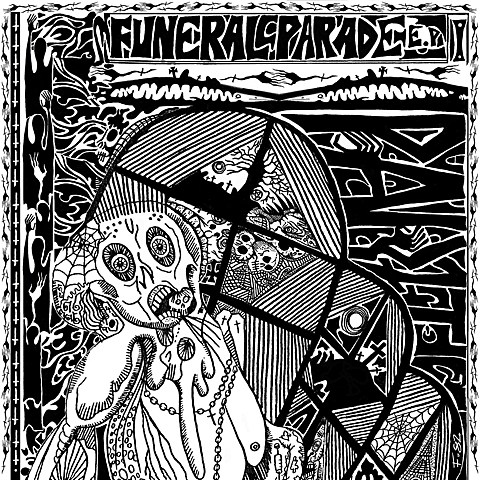 For a long time, Part 1 seemed like perhaps the ultimate cult deathrock and punk band. From Milton Keynes, about 50 miles northwest of London, the band were part of the darker side of the early 80s UK anarcho-punk phenomenon that included Amebix, Rudimentary Peni, The Mob, Lack of Knowledge, Null and Void, The Dead, and others. Flangey and atmospheric postpunk guitars; echoing vocals that reminded of Rudimentary Peni; song titles like "The Corpse," "The Tomb," "Incest," "Ghost," and "Black Mass"; and creepy black and white artwork - it was easy to imagine the band as a coterie of fog-enshrouded ghouls banging out their particularly morbid take on punk in a dark tomb on England's moors. Like Amebix, who - it is hard to believe now - languished in relative obscurity until the internet revived interest through viral file- and video-sharing, so lately Part 1 are on the verge of being given their proper due. [Cvlt Nation]

The above quote is from a 2012 article on '80s UK deathrock band Part 1, who had decided to reform two years earlier. Their first show since the '80s happened at London's Buffalo Bar in August 2013, and this April they'll play their first-ever US shows.

Those shows include three in NYC, two of which are part of multi-venue punk festival New York's Alright. Their NY's Alright shows happen April 17 at Saint Vitus with Australia's Rule of Thirds, Survival and Cheena (mems of Pharmakon, Crazy Spirit, Dawn of Humans, L.O.T.I.O.N., and Hank Wood & The Hammerheads); and April 18 at Saint Vitus with Anasazi, Pleasure Leftists and Institute. 4/18 is sold out, but tickets for 4/17 are still available.

After that, they play a Nothing Changes party late night on April 22 at Home Sweet Home with Tokyo punks Raw Distractions, who will also be in town for NY's Alright. That one's $8 at the door, and doors open at 10 PM.

Part 1 also have a Pittsburgh show with Wrathcobra and Silence, and a Philly show with Dark Blue and Fuck SS. All dates are listed below.

Though Part 1's discography had been out of print for years, All The Madmen reissued their 1985 album, Pictures of Pain, earlier this year in the UK, and Sacred Bones is reissuing their 1983 EP, Funeral Parade, on April 14. Stream the remastered "Salem" from the upcoming Sacred Bones reissue, plus "Black Mass" from Pictures of Pain (not the remastered version), below...