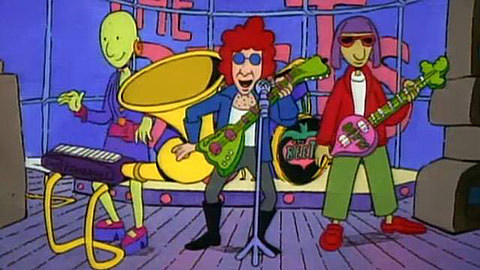 One of the big anticipated events at NY Super Week was "SLIMED: A Night of Nickelodeon Nostalgic Nonsense" at Hammerstein Ballroom on Thursday (10/10) featuring a live taping of Pete & Pete stars Danny Tamberelli and Michael Maronna's podcast, a segment on the music of Doug (a live performance by show creators Fred Newman & Dan Sawyer), and a live performance by Pete & Pete theme song band, Polaris. But less than a day before the event was to take place, the event has been canceled. There is good news, though, see below.

The sudden cancellation could have something to do with the Flavorwire interview with  Matt Klickstein -- who was the host of the Super Week event and who wrote the SLIMED book about '90s Nickelodeon. You'd think it would be all fun and "remember when" interview, but it got into some thorny territory, including bashing of the current state of Nickelodeon, but also...race and sexism. An excerpt:

The reason Pete & Pete does so well is it's the best show from that era. It's the best show from that network! Hands down: the way it looked, the music, the fact that they got all these really interesting cameos... so the fact that it happens to take place in the suburbs of New Jersey, you know, it's a whitewashed area! There's nothing to be said about that. So too with Clarissa.

I think it's worse when they shove it in there. Sanjay and Craig is a really good example, which funnily enough is written in part by Will McRobb and Chris Viscardi from Pete & Pete. That show is awkward because there's actually no reason for that character to be Indian -- except for the fact that [Nickelodeon President] Cyma Zarghami and the women who run Nickelodeon now are very obsessed with diversity. Which is fine -- do what you're gotta do, and Dora [the Explorer] was certainly something of a success, but there's no reason for [Sanjay] to be Indian at all. No one working on that show is Indian. They're all white. It's all the white people from Bob's Burgers and Will and Chris.

I think that it does the culture a disservice. If I were Indian or Jewish, for example, and watched something where the characters are Jewish or supposed to be, and if it's not specific to that, then I start to wonder, "Why are they doing this?" It becomes blackface.

They're exploiting this, they're using this thing, they're taking advantage of it. They're doing it just for that reason: "Hey, here is the Jewish character" or "Hey, here's the Indian character" or "Hey, here's the token black," which I think South Park does so amazingly well. For example, I've worked very closely with people with disabilities, volunteering, sometimes paid, and I love what South Park does.

There's much more to this interview and you can read the whole thing here.Some people are sticking up for Klickstein, like Trevor Eyster who played "Sponge" on Salute Your Shorts. He wrote a lenghty post on Facebook, saying Klickstein was a victim of "corporate interest and censorship":

The decision to cancel the event was made by Comic-Con. And while they haven't released a statement, it would sure seem like this is a case of a corporate entity not wanting to be attached to the opinions of another that would seem controversial, or unclarified....

...I am standing by my friend, because that's what friends do. I am asking all of you to deepen your understanding of the TRUE narrative here. And the true narrative is: Nickelodeon once represented the spirit of the anti-corporate. Now, while Nickelodeon didn't curate, sponsor or endorse this event --- all of the interested parties, are fans of its 90's "products". In order to hold an event of this size, logistically, there was a need for a Comicon. Comicon yanked its support at the last minute, and that's who you need to be upset with...

...You can be upset with Matt for a badly worded interview all you want - but it's not only unproductive, it's misdirected.

You oughta be PISSED OFF at the corporate heads of Comic-Con for pulling the plug from an old-paradigm fear-based profit-motive mentality.

This is a bummer for '90s Nickelodeon fans -- many of whom were coming from out-of-town for this -- but there is a silver lining as the Super Week event is now, basically, happening as two smaller, separate events on Thursday. First is "Slimed! An Oral History of Nickelodeon's Golden Age" at Treehouse Theatre (154 W 29th St, New York,) from 6 - 9 PM, featuring the music of Doug with a live performance by show creators Fred Newman & Dan Sawyer and hosted by Nick Arcade's Phil Moore. It's $8 at the door and Super Week ticketholders get priority entry. More info here.

Then later Thursday night (10:30 PM) at The Bell House it's a live taping of Danny Tamberelli and Michael Maronna's podcast, The Adventures of Danny & Mike, with a live performance by Polaris. Tickets to that show are $10 and on sale now. AND, update: Danny Tamberelli "just wanted to say that I was really looking forward to a night of nostalgia and to hang with the fans of all things 90s nick. Sometimes weird stuff happens that you can't control. Polaris and the podcast want to try to create something out of the ashes like a Phoenix. (also a ginger ironically)."

If you miss it, Polaris returns to the road in November for more shows including a BrooklynVegan-presented NYC show at Knitting Factory (though that one is sold out).