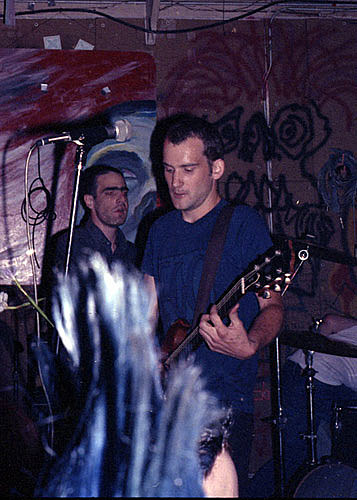 Alternative Tentacles released a trailer for their upcoming documentary of the legendary punk venue 924 Gilman in Berkeley, CA. Check it out down below. For those of you east-coasters who aren't up on Gilman, here's a little bio courtesy of the world's most accurate encyclopedia:

The 924 Gilman Street project, alternately the Alternative Music Foundation, is the Berkeley, California street address and official business name of the all-ages, non-profit, collectively organized music club usually referred to by its fans simply as "Gilman.".... On December 31, 1986, the club held its first show. Since then, 924 Gilman Street has been one of the longest-running independent music venues in the United States..... 924 Gilman... was started in part because of the lack of punk venues in the San Francisco Bay Area during this era, particularly all-ages venues.

Pretty much every major punk/hardcore act has passed through Gilman and some of it's regulars, like Green Day, Rancid, & AFI, went on to become major arena-filling acts.

Fugazi went on to break up which I'm really only mentioning so I can remind you again that you can catch one of their members live in NYC tonight (May 27).

The documentary trailer, and info on Jello Biafra's 50th birthday party, below.....

A night of the Melvins with and without Jello Biafra, Jello Biafra solo, a reunited Drunk Injuns, and Akimbo! Jared & Coady (of Big Business) won't be in the heezy though, as they are currently grinding away at their follow-up to last year's Here Comes The Waterworks, so Dale Crover will slide into the bass slot and ORIGINAL drummer Mike Dillard will take his seat for "Mangled Demos" with Andy Coronado filling in on bass for the "Jelvins" (Melvins & Jello) stuff. Ticket info is available here.

Akimbo, or they who "eat beer & shit riffs", are working on their new one for Neurot, the concept-record Jersey Shores.

Melvins have a new record (Nude With Boots) and a new DVD (The Fantomas/Melvins Big Band Live From London 2006) coming this summer.