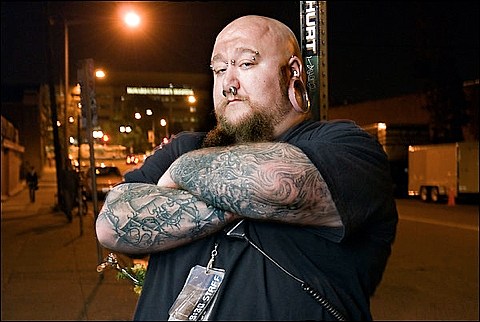 Josh Burdette, [Washington, DC's} 9:30 Club's manager and perhaps the most recognizable presence in all of Washington nightlife, has died. He was 36.

With his large ear gauges, facial piercings, tattooed forearms and imposing physique, Burdette was not someone a fake ID-holder ever wanted to encounter. A fixture at the club since 1997, the man known as "Big Josh" or "That Guy at the 9:30 Club" resisted being called a bouncer. "A bouncer is looking to bounce people. It's a reactive way of doing things," Burdette told The Post's Chris Richards in 2006. "We're the face of the club, and we have to do our best to be as friendly, polite and accessible as we can. Some of us look big and scary, but we're just people, too. We're just working our jobs."
...

"Josh was one of the wisest people you would ever meet. When you talked to him, you hoped you would be lucky enough to retain some of that wisdom, but you had to make the effort as he never forced it on you. But every word he spoke was from one of the kindest, most thoughtful and well-centered folks you could hope to have in your life.

And then there was the fantastic joke that people that didn't know him fell for every time. Here was this scary looking dude that was a complete contradiction of his appearance. I think everyone felt a little ashamed and learned from that.

I'm pretty good at moving on but this one's gonna be tough. There will be no getting over it, sorry."