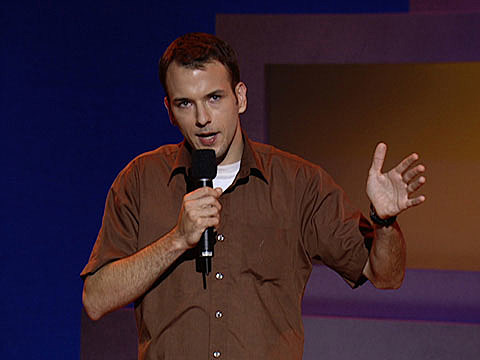 Speaking of Hot Tub with Kurt & Kristen, maybe you were at the weekly variety show this past Monday when Andy Blitz, one of my favorite people in the biz, performed. It has been a really really long time since I last had the good fortune to catch him live, but all of a sudden multiple opportunities are popping up!

In general, I try to remain apolitical in my writings here on BV. Believe me, if you knew my views on society it'd be like a scene in a movie where some dude (me) farts in a crowded elevator and everyone in there (you guys) nonchalantly scuttles to the other side of the elevator. However, there is no denying that many many many members of the comedy community are still very much involved in the Occupy Wall Street community. Perhaps not always physically, but definitely philosophically. Case in point; an event called 99 Comics For The 99% happening at the UCB Theater East on Tuesday May 1st at 8:00pm (May Day). This massive undertaking will feature 99 Comics telling jokes in support of the 99% and OWS. Man I don't even think I could name 99 comics. Anyhow, the line-up (included below) features some seriously great talent and many Klaus faves including Adam McKay (via video), Adam Newman, ANDY BLITZ, Eliot Glazer, Giulia Rozzi, Greg Johnson, Jamie Kilstein, Jimmy Dore, John Frusciante, Jon Friedman, Murderfist, Rob Cantrell, Sara Shaefer, Seth Herzog, Stucky & Murray, Tom Shillue, Two Fun Men, and, well, many many more. Two Fun Men were actually on Fallon the other day in what has to be one of my favorite sketches in ages. Video of that below too!

I am also really happy to announce that Jesse Popp, one of the most pants-shittingly funny up and coming NYC comic geniuses of our time, is recording a Comedy Central special over two nights at Union Hall. The shows will take place on May 2nd and May 4th. Both shows have 7:30pm doors, 8:00pm shows. Tickets are only $5, so you not only get to see one of NYCs finest comedians on the cheap, but the back of your numbskull might even make it on TV. Check out Jesse in the New York Times' One in 8 Million series. Jesse is a great down to earth comedian with a good head on his shoulders. This country will be a much better place when the name Jesse Popp becomes a household name, I tell ya.