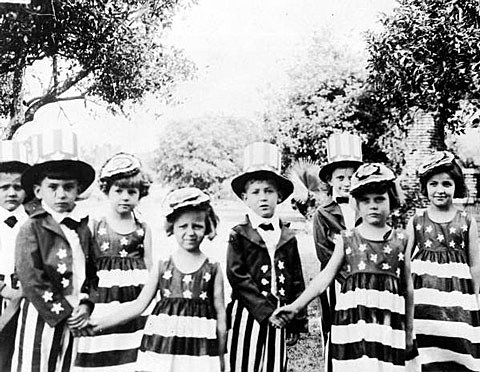 The Fourth of July falls on a Friday this year and for those not using Independence Day Weekend to get away from the city -- or for those who will be visiting from out of town -- there's never a shortage of things to do. We've got a bunch of mostly musical suggestions for you.

If you wanna start your weekend off early, Thursday (7/3) has a few good options: The Black Lips and Night Birds will play a free show at House of Vans with "special guest" (RSVP is full); You could also go see Au Revoir Simone at MoMa Nights (free with museum entry); and Erasure/Depeche Mode's Vince Clark will be DJing with Mute Records founder Daniel Miller at Bowery Ballroom (tickets)

Macy's annual 4th of July fireworks extravaganza moves back to the East River (where they belong!) so Brooklyn can enjoy them again. Once again, they're also being broadcast on NBC that also features live performances from Lionel Richie, Enrique Iglesias, and Ariana Grande. Here are best spots to see them.

Though it looked like they might not get a permit, Coney Island will be having its own fireworks this year on the Fourth. You could make a day of it, with the Nathan's hot dog eating contest, the beach, take in a Cyclones game, ride the Cyclone rollercoaster, see some freaks, and end the night with fireworks.

There's not a whole lot in the way of shows on the 4th (with Maxwell's closing, so goes The Feelies annual shows), but there are a couple options for those in need. Brooklyn Night Bazaar will have old-timey folk band Spirit Family Reunion, with Odetta Hartman and Gunfight. That's free and you can RSVP to skip the line.

If shaking your hips is more your thing, DJ Danny Tenaglia will give one of Brooklyn's best new dance clubs a tribal taste of the 90s with an extended DJ set going from 10pm to 6am (tickets).

There was supposed to be a rooftop edition of Q-Tip's #OFFLINE party earlier that day at Output, but that has been canceled. In it's place Joey Anderson, GE-OLOGY, and Turtle Bugg will be DJing on the roof from 3 PM - 10 PM. It's free with RSVP bound to be a great place to watch the fireworks.

Speaking of 90s hip hop group musicians turned DJs, Questlove of the Roots has been DJing at Brooklyn Bowl for 5 years now. It's a long weekend, maybe his 11pm set on Thursday (73) is your chance to finally check 'Bowl Train' out. Head back to Brooklyn Bowl on Saturday (7/5) for food, beer and the World Cup quarter finals followed by some Guns N' Roses tribute bands and, late night, LCD/Juan Maclean cohort Nancy Whang DJing.

There's also Lincoln Center's "Midsummer Night's Swing" which on the 4th features Puerto Rico's Willie Rosario y Su Orquesta Salsa. And if you can't mambo or otherwise, dance lessons are given before the main event. Tickets are still available.

Another option that includes two shows on the fourth and others throughout the week is Ascetic House's long Independence Day weekend in NYC. It begins with a Destruction Unit show at The Studio at Webster Hall on Thursday (tickets). Then on the fourth, D Unit's Jes Aurelius will bring his Marshstepper project to Palisades with a bunch of other experimental musicians, and late that night D Unit hits Silent Barn. The psych punk crew's shows are always intense, but this intimate Silent Barn one should get real wild (and hot). There's multiple other shows over the next few days including D Unit drummer Andrew Flores' Jock Club project at Bossa Nova Civic Club on 7/6 (free late show) and an 8 PM show at Baby's All Right on 7/7 with a band called Lucifers Stoned Disciples who don't appear to be an actual band. Any idea who it might be? (PS, D Unit's new Adult Swim Single is out now and can be streamed below.)

UPDATE: Destruction Unit's July 4 show at Silent Barn also includes Tomboy (the other band of Ali from Potty Mouth), Emily Reo, Cuddle Formation, Arm Candy, Alice and "Mute Benny" who may or may not be a band whose name rhymes with Schmutual Schmenefit. Starts at 2 PM.

If you're looking to get (not too far) away for the Fourth, you can head to Montauk where Philly shoegaze rippers Nothing are among a lineup of bands playing Red Bull Sound Select's 'A Weekend In Montauk.

A closer beach option is Rockaway, where at Rippers you can see Heliotropes, Wild Yaks and Friend Roulette. Bands start at 5:30 PM, it's free and more info here.

Further into the weekend, Union Pool's Saturday afternoon series "Summer Thunder" is a good one this week (7/5) with Widowspeak and Zachary Cale. It's free, outside, with drink specials and the taco truck in the backyard (that actually serves brunch stuff), and a pretty fun way to spend your day. Later that night in UP's performance space it's Long Island punks Iron Chic with Great Thunder and more.

For an even artier Saturday, the Knockdown Center is throwing a closing reception for its Anxious Spaces installation, with performances by Dutch E Germ, Bubbles, Brian Chase (of Yeah Yeah Yeahs), Trabajo, VenessWolfChild, Rul de Nieves, Cloud Becomes Your Head and more. Entrance is $7-15 sliding scale.

For those who like things heavy, Saturday also offers two chances to catch Thou and The Body who are currently tourmates. There's a matinee at ABC No Rio, then a late night show at Palisades (doors at midnight).

And if neither heavy nor arty are your jam (okay maybe a little arty), the great avant-pop band Hundred Waters brings their tour to Glasslands on Saturday with Mas Ysa for their first show here since the release of their new album. You can still get tickets.

Another Saturday option that won't cost you anything is heading to Prospect Park for the ongoing Celebrate Brooklyn series which hosts a great, diverse lineup of jazz/hip hop collective The Robert Glasper Experiment who will be joined on stage by veteran rap great Talib Kweli. Percussionist/composer Glenn Kotche and Brooklyn poet Aja Monet open. Doors open at 6, music at 7.

Fourth of July Weekend is also your last chance to check out the Kara Walker exhibit at Domino Sugar Factory.

Whatever you do, enjoy your weekend! Stream that new Destruction Unit song below...