Hardcore is always screaming about unity, and in times like these, it's admirable that those aren't empty threats. A gang of NYHC bands have teamed up for a benefit for two of their own, Dr. Tom and Walter "Monsta" Ryan of Subzero and Merauder who has liver cancer. NYHC legends Sick Of It All, Cro-Mags (jam), Murphy's Law, Maximum Penalty, Subzero, Jasta (aka Jamey Jasta of Hatebreed) and many others are playing a benefit show at Studio B (we'll let you know if that venue changes) on 9/27. Tickets are on sale, check out the flyer down below. If you can't make the show, there are two other ways you can help..... buy yourself a CD and/or sign up for a free website. 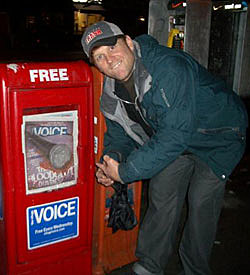 What the hell is a Cro-Mags (jam) anyway? No, it isn't Trey Anastasio playing a 25 minute version of "We Gotta Know" nor is it the latest concoction from Smuckers..... Cro-Mags (jam) is the throat of Village Voice cover star John Joseph with a crew of "No-Mags" providing the soundtrack (aka John is the only original member in the group. The other original members have toured as just "Cro-Mags") . The jam band is also on board for this year's Fun Fun Fun Fest along with ALL (who recently reunited), Dead Milkmen (who also reunited), Flipper, Adolescents, Integrity, Young Widows, Trash Talk, Walter Schriefels, Bad Brains, Bouncing Souls and many many many others.

Bad Brains are also playing a NYC show. It's at Irving Plaza on November 6th and tickets are still on sale.

Bouncing Souls AND Sick Of It All are also playing a NYC show, together, at Terminal 5, with Grey Area. Tickets are still available.

In possibly-related, possibly-NYHC news, Vision Of Disorder will put up their dukes with Indecision, Overcast, and Nassau Chainsaw on Nov 16th at Irving Plaza. Who is Nassau Chainsaw, you ask? NC is a collective of musicians from two very different NYHC bands, Neck and Locked in a Vacancy. Tim Williams (VOD), Sal Lococo (Sworn Enemy), and Mike D(Car Bomb) all lend vocals to their album. VOD's Dead in NY DVD is due on November 11th on Koch. Tickets go on sale 8/30 at noon. VOD's last reunion show was at the Crazy Donkey in Farmingdale. This will be their first NYC show in a while.

As we mentioned a couple weeks ago, the original line-up of Biohazard is playing Irving Plaza on Oct 5th. Tickets are on sale. The band recently did the same thing at L'Amours (which is now in Staten Island).

Absolution have also scheduled a second reunion date at ABC No Rio on 10/25, this time with Starkweather.

Check out a bunch of related videos and the benefit flyer below.... 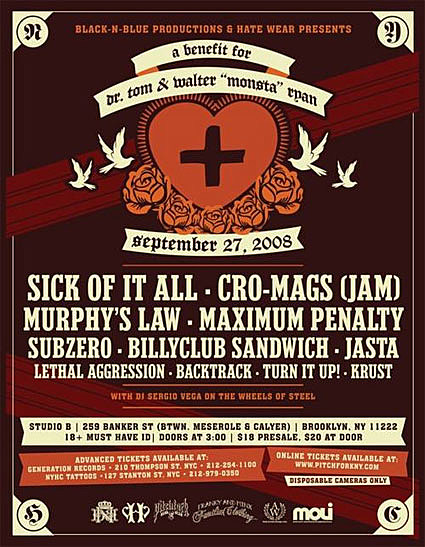 Sick of It All talk about the Dr Tom benefit