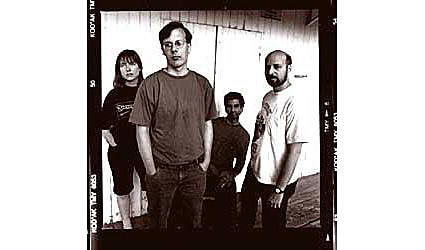 Melding pop, folk-rock, and alt-country sounds with quirky wit and a keen intelligence, the Schramms were the brainchild of gifted guitarist, vocalist, and songwriter Dave Schramm, who debuted the group in 1987. Schramm, who had previously played with Human Switchboard and Jon Klages, left Yo La Tengo in 1986, following the release of their debut album, Ride the Tiger, and he soon began working up material with fellow Human Switchboard alumnus Ron Metz and drums and bassist Terry Karydes, who had played in an embryonic version of Yo La Tengo. After Karydes' bass was stolen, she moved over to keyboards, and Mike Lewis, another former member of Yo La Tengo, took over on bass, with guitarist Todd Novak and sax player Pete Linzell filling out the lineup. [All Music]

This show is listed on the Maxwell's schedule: "Fri. 9/5 Benefit For Terry Karydes feat. Ira Kaplan (Yo La Tengo), Georgia Hubley (Yo La Tengo), Glenn Mercer (The Feelies), Kate Jacobs, Tammy Faye Starlite, Dave Schramm, Ron Metz and Al Greller 9 p.m. $15". No ticket info (or info on why a benefit is needed) yet. Yo La Tengo are also playing McCarren Pool. The Feelies are also playing Bowery and Music Hall.