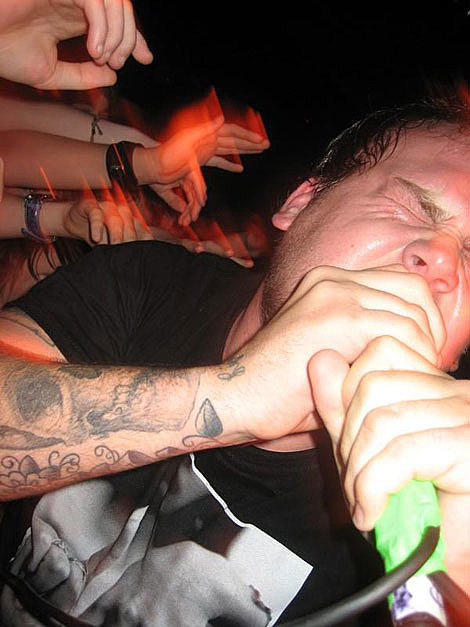 What are you up to Wednesday, March 18th? If you're in the greater Austin region, it might be a good idea to slide on down to Emo's for a day of killer bands, suds, and full on badass-ed-ness. To get all official and shit, we'd like to announce the FREE BROOKLYN VEGAN/SOLID PR DAY PARTY featuring

The bands kick off at 2PM, but get there by 1:15 to experience the NEW Big Business record Mind The Drift before it hits the shelves on Mar 31st. Our friends from ilovemikelitt will also be on hand to help spread good causes and cheer, and special thanks goes out to Timmy for all his help in putting this together.

This all goes down inside Emo's on the 2nd stage on the afternoon of the first day of SXSW Music. Happening at the same time on the main stage of the same venue is the also-killer, also-free Fat Possum Records day party with King Kahn & BBQ, Wavves, Thomas Function, Strange Boys, Crocodiles, Thomas Function and more.

Young Widows recently dropped the video for "Old Skin" from Old Wounds, a song that premiered right here on BrooklynVegan. The band is logging some miles in the coming months (dates below), linking up with Australian band My Disco for the trek and playing Europa in Brooklyn with The Austerity Program & Tournament on April 1st in the process (tickets here). The pair will also drop a split 7", one of a series with the likes of Bonnie "Prince" Billy, Pelican, and Melt-Banana.

NYCers will have FOUR chances to check out Garotas Suecas in the coming month, three in person and one on the Pat Duncan Show on WFMU on March 26th. The band has lined up live appearances at Mercury Lounge on March 24th (tickets here), Death By Audio on April 5, and Zebulon on April 6th.

Psychedelic Horseshit have a "a self released LP collecting our very first and oldest 4 track recordings" due in "March or April" entitled Golden Oldies as well as a TON of new material including Shitgaze Anthems 12" EP on Woodsist (spring 09), Acid Test 12" EP on Troubleman Unltd. (late spring/early sum 09), Beached Wails 7" with a "surprise release date", and their second LP, Too Many Hits, on Slitbreeze (late summer 09). The Columbus, Ohio crew have a few dates on the calendar as well, check THOSE out, along with everyone's tour dates, below...