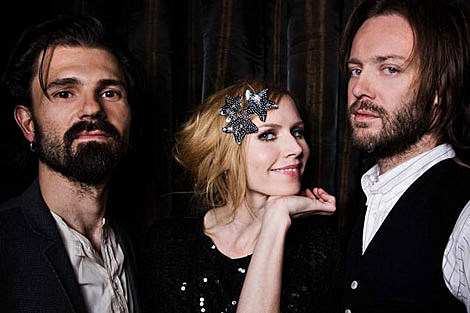 A Camp, the trio fronted by Cardigans singer Nina Persson, has announced a full European tour and (so far) one US date in support of its second album, Colonia, out April 28th via Nettwerk. The band will be playing the Bowery Ballroom on Tuesday, May 26 (on sale Friday at noon, Am Ex presale on Wednesday) - which will be a hometown show of sorts for Persson and husband/ex-Shudder to Think member Nathan Larson (who, with ex-Atomic Swing musician Niclas Frisk, make up A Camp).

An article in the UK's Independent discusses Persson's life, The Cardigans, and the move:

[After recording The Cardigans reunion album Super Extra Gravity,] Persson finally spread her wings, moving to New York with Larson. "I was feeling positive, strong," she says. "It was a nice sensation."

Eighteen months ago, Persson and her husband decided to get on to Manhattan's property ladder. They couldn't afford much by themselves, so decided to go in with Larson's parents. They now share a four-storey brownstone in a part of Harlem that has yet to undergo full gentrification.

"We've been burgled three times in 18 months," Persson notes, "but that's just something that happens. And besides, the police are really helpful. They know us by name now..."

The band, which won four Swedish Grammys for its 2001 self-titled debut, performed at this year's ceremony, video below. One of A Camp last NYC shows was at Union Hall in August 2007.

All tour dates, plus a live video/interview, below...

A Camp - Stronger Than Jesus - Live at 2009 Swedish Grammis