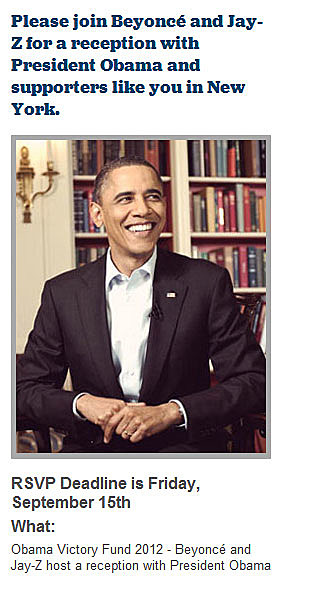 Jay-Z and wife Beyoncé will host a fund-raiser for President Obama at the "Watch the Throne" rapper's 40/40 Club on Sept. 18. We hear the event will be intimate and capped at 100 guests who will shell out $40,000 per ticket to dine with the commander-in-chief and hip-hop royal. Earlier the same day, Obama is scheduled to attend a reception where families can pose for a photo with him for a $12,500 contribution. A rep for Jay-Z's West 25th Street club had no comment. We're told the campaign stop will be Obama's last in New York before the election. But does this mean the president will miss Jay's concerts at Brooklyn's new Barclays Center at the end of September?

I wonder if Jay's old friend Russell Simmons will buy a ticket, and if so if they'll use the occasion to talk Occupy Wall Street. Jay's 8-show run at the Barclays Center, which Occupy plan to have a presence at, starts 10 days later.

In related news, Kanye's G.O.O.D. Music album 'Cruel Summer' is out next week.