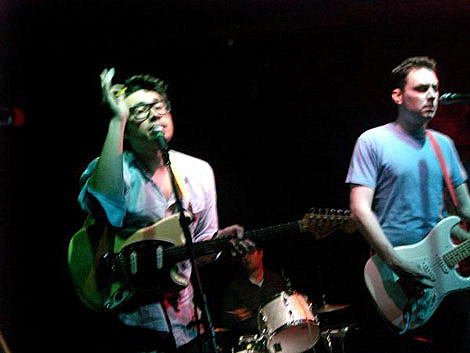 You weren't originally in the band. When did you join Takka Takka?

Gabe [Levine, frontman of Takka Takka] asked me to join at one of the National 'Boxer' release shows at Bowery Ballroom. It was late May '07

What happened to the old guitarist?

I was an addition. The old band was only 4 members, now there are 5. Rene Planchon and I joined the band around the same time upon the departure of the former guitarist, Damion Jurrens.

So, how many shows will you have played total by the end of CMJ week?

By the end of CMJ, with the shows and in-studio performances, I think we're playing about nine.

And four of those were on Wednesday? How was that?

Gabe (the frontman) seems to put a lot of emotion into every performance. Was it especially hard for him?

Not counting the BrooklynVegan show you haven't played yet, which was your favorite so far?

The KEXP in-studio on monday morning. It was an honor to perform on-air for a station we are all huge fans of.

Have you had any time to check out bands you weren't playing with?

No, but we got to see our friends Sam Champion who we did play with...

..It's funny, we played right after Women. Then later in the day, they played right before us -- And our Terrorbird party at Cake Shop was running late, so after we finished our set there, Pete from our label literally grabbed my amp, brought it upstairs, carried it next door to Pianos, and put it on stage. I followed him out the door, set right back up again, and played.

Catch Takka Takka (again) at 4:00 PM in the Tap Bar at the free BrooklynVegan day party this Saturday (October 25th). Women are also on the bill.