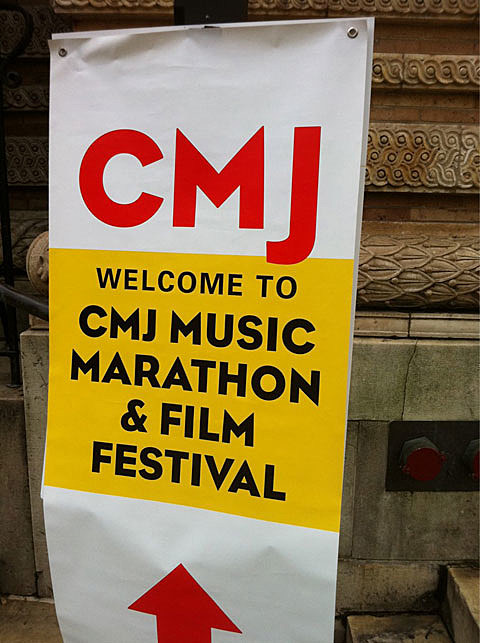 I started day one of CMJ, my first-ever CMJ, at the 'Future of the Music Business, Really?' panel. It was really interesting and I learned a lot. The panelists discussed potential ways to keep the industry of recorded music alive, and from what I gathered, most of them agreed that if there was some way to pay a fee for unlimited music downloading, it would probably result in the most positive reception.

From there I hit the 'American Hardcore and the Rise of Modern Rock' panel. This was probably the most interesting panel I went to all week. It was moderated by American Hardcore: A Tribal History author Steven Blush and the panelists talked about how so many aspects of modern rock really are directly influenced from the early '80s hardcore scene, especially regarding the relevance of indie record labels, street teams, and samplers.

They also discussed how the American hardcore movement really is an art movement, not just a style of music. Among the panelists were Vic Bondi from Articles of Faith and Jack Rabid from the magazine, The Big Takeover. It was great to hear things about the movement from people who had really been there when it was prevalent. The event was one of many recent promotional appearances for Steven Blush. You can catch him again in NYC at The Strand at 7pm on 12/15.

Then I made my way over to the Ground Control showcase at Irving Plaza which was headlined by Jenny and Johnny (who I couldn't stay for). I really enjoyed Times New Viking - my first time seeing them. The drummer has the band move from one song to the next so quickly. I also enjoyed Wild Nothing's set a lot, especially now that I knew their album. I had actually seen them over the summer open for The Morning Benders but wasn't really familiar with them at the time.

I ended up being a little disappointed with the panels I attended today. I started at the 'How To Start A Movement' panel. The panelists were fine, they just didn't really discuss what I hoped they would.

I then attended the 'Curmudgeons of Rock' panel and pretty much felt the same. The panel began with the general question, "Is good music criticism in danger?" However, the panel ended up being a little too vague. It got better when Charles Aaron from Spin discussed the difficulties of writing a negative review. He said, "Music is so emotionally personal, people hate reading negative reviews about music that they love." I was glad he said that. I do think you should think hard before completely trashing a band's live show or an album.

At night I went over to Santos Party House for the Stereogum/Pop Gun showcase. While I was waiting for the show to start, a woman interviewed me on video about the show, CMJ, and music in general. I talked about bands I was excited about and why I'm interested in discussing live music. That was cool. I also really enjoyed all the bands that I saw tonight: Lower Dens, Tamaryn, Dom, Marnie Stern, and Wild Nothing (again). I very regrettably missed The Drums because they went on so late and I had to catch my last train home.

Dom really exceeded my expectations. Their computer was actually broken that night, and I thought it was interesting to hear them as just a guitar/bass/drums rock band. It was also my first time seeing Marnie Stern, and she completely won me over as a huge fan.

I didn't go to any panels today. Instead I started the day off at the Neon Hitch/Chess Club showcase at Public Assembly, which lasted all day into night. I went to the showcase because I was excited to see Oberhofer and Devin Therriault, both of whose sets I really enjoyed, but I also ended up discovering some new bands that I'm definitely now a fan of.

I was completely blown away by UK band The Good Natured. The Good Natured is a male bassist and drummer with samples playing through the PA fronted by a very charismatic and seductive female singer. The songs were somewhat reminiscent of 1980s synth/goth rock, and were so catchy while still maintaining a vibe of darkness. After they finished I talked to the singer and got their promo CD, which I enjoy just as much as their live show. I also thoroughly enjoyed sets by Alex Winston and Ava Luna.

THE GOOD NATURED ON BBC SWITCH

The Good Natured ' Your Body Is A Machine '

Later on in the day, I went next door to Music Hall of Williamsburg to the BrooklynVegan showcase. I caught some of Screaming Females and thought they sounded incredible. It was amazing to finally get to see Marissa Paternoster play guitar. Then I stayed to watch some The Blow and she was great and funny. I then went back to Public Assembly to see LA band Grouplove who I had checked out on myspace, but they ended up completely exceeding my expectations. They looked like they were having more fun on stage than any band I've ever seen. Grouplove is the perfect name for them. They have shows coming up with Florence & the Machines and The Joy Formidable including a November 16th gig at Bowery Ballroom with the latter.

Today I started the day off at the BrooklynVegan day party at Public Assembly. I saw Times New Viking (again), Oberhofer (again) and Dom again (Dom's computer wasn't broken this time, so it was cool to see them with their synths too). I also saw Ty Segall and John Vanderslice, and they both played great sets. John's was solo until the end when he had two friends join him on trumpet and accordion-like instrument. They finished their set on the floor surrounded by the crowd on all sides.

At night I went to Knitting Factory to check out more bands. I wasn't really too familiar with any of them, but I ended up really liking garage pop band Gentleman Jesse and His Men.

Gentleman Jesse & His Men - I got so excited

Today I went to the BrooklynVegan day party at Public Assembly again. I had been hearing good things about Morning Teleportation so I checked their set out and really liked it. I was pretty familiar with the rest of the bands that I saw today, and was excited for the whole lineup really. Ted Leo played solo which was really awesome. On Friday I arrived too late, but today I was there in time for the vegan empanadas from V-Spot and they were so good. Especially with the dipping sauce.

I saw Wild Nothing for the third time this week, and thought they were excellent as always. It was also lots of fun seeing Titus Andronicus, Marnie Stern (again), and Jamie Lidell. The only act I saw that I had never heard anything at all about was Big Freedia, but I'm pretty sure I'm never going to forget her set. She certainly knows how to put on a memorable show...

this is one of many BrooklynVegan posts highlighting parts of the 2010 CMJ Music Marathon.