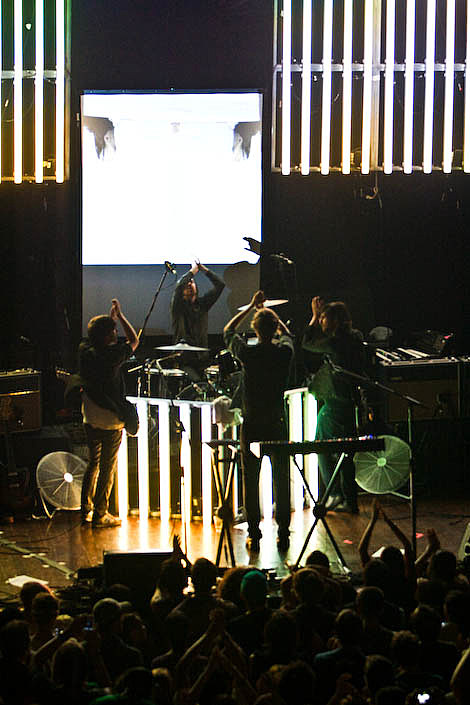 Thursday I hit Santos for one of the Ete d'Amour parties I'd been looking forward to since the initial schedule was announced - Busy P & DJ Mehdi. Having seen Busy P and DJ Mehdi spin on multiple occasions, plus months of anticipation, still did not prepare me for Thursday night. Their sets crushed my expectations, going far beyond what I imagined. From the super fresh, to 'oldies but goodies', their individual sets had it all, but the real magic happened when the pair shared deejay duties - trading off every other track for one of the most unique, highly danceable, fun sets I've experienced this year. You can read more about the night here.

I really didn't want to do it (especially with Sinden deejaying at Love on Saturday - anyone go? how was it?), but I took the next two nights off from dancing. Then Sunday night I ventured out earlier than I've gotten used to, to see the Presets and Cut Copy at Webster Hall. The Presets took the stage around 9, beginning their set with "Talk Like That" with Kim's thunderous drumming reminding me of Soulwax's show at Irving Plaza last month for just a fleeting second. Much to the crowd's delight, he and Julian delivered about an hour of pounding (in a good way) dance music, most of which even I (not the biggest Presets fan) was able to enjoy.

Around 10:30 Cut Copy began what was to be an hour long, electrifying set with "Visions" followed by "Nobody Lost, Nobody Found" - the two songs that begin their most recent album In Ghost Colours. From there they played plenty of material from both that album as well as Bright Like Neon Love, whipping the crowd into a frenzy that resulted in happy faces and a bouncy Webster Hall floor as everyone jumped with glee to the Australian trio's upbeat tracks. You can check out the rest of what they played as well as some more great photos here. 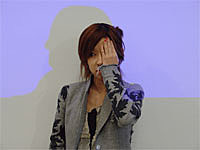 As great as I always feel after dancing around at a Cut Copy show, there is something really beautiful and poignant about some of their lyrics that always seem to make the experience more emotionally involving than a straight-up, banging deejay set. One very poignant moment during the show, probably lost to those unaware of her passing, was the band's dedication of their last song, "Hearts on Fire" to Nagi (Noda), the young Japanese director responsible for the music video (the last she worked on) for that song. While I only recently became familiar with her work, it's always sad to see someone so young and creative leave our world so quickly...

As is basically the norm at this point, we're in for another very eventful weekend dance-wise in New York. Things get started tonight (Thursday, Sept 25th), with quite a bit going on from which to choose:

I am really quite sad to report that Thursday night is the last Ete D'Amour party at Santos. The Respect crew really turned it out this summer, bringing a plethora of France's (as well as many of Europe & the US') top deejays who packed Santos' welcoming dancefloor with happy, sweaty, people getting down in a way I haven't seen in all too long. Initially I was really upset to see the series ending with with Supermayer (Kompakt labelmates, Michael Mayer and Superpitcher), but after investigating I realized I had them confused in my mind with some more boringly minimal-oriented Germans. This duo is far from it, bringing a unique blend of funky electro/techno sure to get everyone moving and make this finale one to remember - don't miss it! Come out one last time to bid this wonderful party a final, fond adieu! 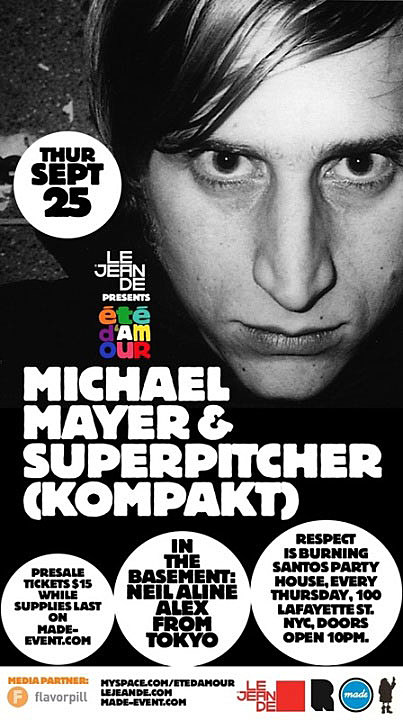 If you can't bear to say farewell, or don't want to (sacre bleu!) there are some other things happening, like:

DJ Cat's Super Sweet 16 at Le Royale. Don't let the name fool you - it actually looks like a good party. Stretch Armstrong (who killed it at the Yard a couple of week's ago) will be deejaying as well as many others, plus New York production duo, Streetlab will be doing a live set! You can download their first single "NYSound" which was recently released on RCRDLBL, and look for the rest of their first EP in early October.

Thursday night, techno legend Carl Craig is at Cielo celebrating the 3 year anniversary of Demon Days with co-founder, Gamall. Check out "Demon Days Revisited" on Gamall's myspace - things are going to get deep. 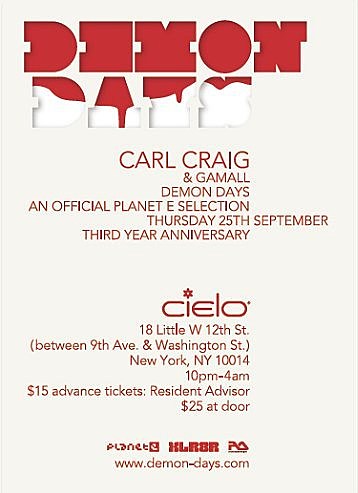 One final option for Thursday, that nearly didn't make it into this post - Ursula 1000 at Hiro:

Free with RSVP. Email event@gbh.tv with your name and number of guests.

Honestly, I was going through some songs on Ursula 1000's myspace, wasn't feeling the first few and had pretty much decided not to include the party in this week's post when I heard "Kinda Kinky" and "Kaboom" each of which have a great retro 60's sound that completely won me over. I'm really intrigued as to what an entire dj set from Ursula will be like...

Friday and the rest of the weekend are on their way, but just to give you a heads up, in case it might influence your decisions for Thursday night - Ursula 1000 will also be deejaying at APT on Friday. Here's some footage of him doing so, as well as brief interview from Current:

Stay tuned for the rest of the week in dance!