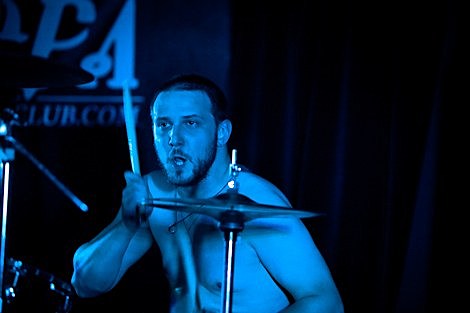 August 9th isnt even here yet, and now we have a second Doomriders show to look forward to in the coming months. They're scheduled to play with Kylesa, Red Fang, Tournament, and Bison BC at Santos Party House on Oct 19th (a date that is awfully close to CMJ 2009). Stoked!

UPDATE: The lineup of this show is unconfirmed, and will not include Kylesa who reportedly "pulled all their East Coast dates". Stay tuned.

NYC's Tournament recently dropped their new LP, Years Old, on Forcefield Records and, as usual, these tireless punks have a few other NYC dates on their schedule including August 16th at Union Pool with Night Horse & Orphan, as well as August 21 at The Charleston with Cannabis Corpse.

Kylesa is scheduled to play Oya in Oslo on August 12th, as well as the Planet Caravan Festival with Wino, Pentagram, and Yob.

Red Fang are currently "in the basement cranking out new songs" to follow up their self-titled LP from earlier this year.

Bison BC is currently on tour with Lazarus AD and Woe of Tyrants. Full tour dates for them, Red Fang, and Tournament are below...