Dysrhythmia at The Charleston in 2009 (more by Samantha Marble) 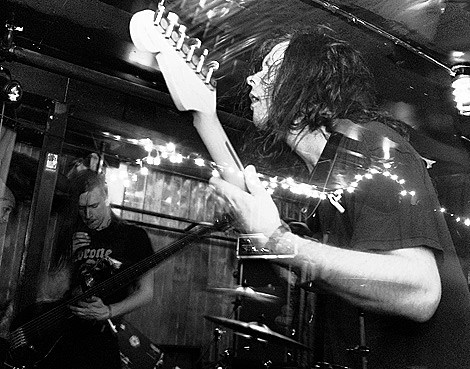 One of the world's most easily misspelled bands, Dysrhythmia, will play Union Pool on 3/11 as part of a show with Zevious (featuring Jeff Eber of Dysrhythmia), Smother Party, and A Fucking Elephant. The party jumps off at 9PM and will set you back $8. Kevin Hufnagel recently posted an update on the band that drops tons of incredible news about his and the rest of Dysrhythmia's projects:

Dysrhythmia is about half way through writing the next record. We'll start demoing stuff in the Spring and perhaps share a track or two online... Otherwise, a new record won't be likely until 2012. The wait will be worth it, promise... One of the reasons for that is simply due to the number of other musical ventures we have happening.

Gorguts will be recording the new album in February, with a scheduled Summer release. Touring will follow.

Krallice will have a new record out in April.

Zevious will be doing their first full US tour in March/April.

I'll have a new solo record called Transparencies out in March/April.

They'll be a record coming Summer/Fall tentatively titled 'Night Sessions' which is a collaboration between myself and vocalist/multi-instrumentalist Costanza Francavilla...

I recently guested on a 20 minute track for long running Philadelphia-based experimental progressive metal/hardcore band Starkweather. This should be out sometime next year as part of a split release. It was an honor for me to play on this track. They've been one of my favorite bands for years.

In addition, Hufnagel's Vaura project has been playing some shows as of late, and Kevin will appear with the half of Vaura (Josh Strawn and Charlie Schmid) that isn't in either Dysrhythmia (Hufnagel) or Kayo Dot (Toby Driver) at the FREE record release party for their other project, Religious To Damn (a band that Zohra Atash is also a member of). As previously discussed, the show will go down at Glasslands on Jan 13th and will also feature an appearance from the great Tamaryn (who will NOT be playing a set of her own).