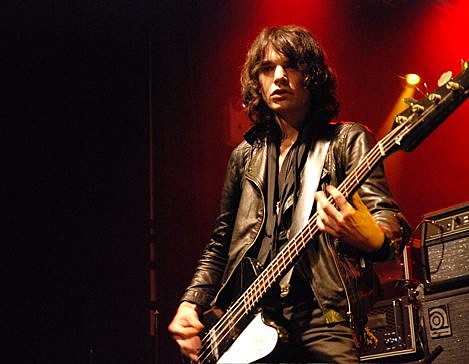 St. Louis garage rockers Living Things are about to appear as one of their hero bands, the Ramones in the now-filming The Runaways, the biopic about the groundbreaking 70's all-girl hard rock group led by Joan Jett. Kristen Stewart of Twilight fame plays Jett, with Dakota Fanning as Cherie Currie and Academy Award-nominated actor Michael Shannon as the band's "Svengali" Kim Fowley...Living Things have already recorded a cover of "We're A Happy Family."

In addition to having a useful resemblance in attitude to the punk progenitors, the band has a direct line into the production - singer Lillian Berlin is the husband of the film's writer and director Floria Sigismondi.

That makes two Twilight actors with roles as rock stars in upcoming movies. Living Things' new record, Habeas Corpus came out earlier this year on Jive Records. A track from it is posted above.

In other movie news, the The Sun UK reports that "drug-guzzling shock-rocker" Marilyn Manson will be filming a musical, "Goth-inspired" version of Cinderella with Harry Potter's Emma Watson. 500 Days of Summer, starring She of She & Him, has an indie rock soundtrack that includes Feist, The Black Lips, and She & Him. Funny People, in addition to featuring characters wearing indie rock t-shirts, also has an indie-friendly soundtrack. Oh, and Patton Oswalt is a Big Fan.

A pic from the set of The Runaways movie, with Living Things tour dates, and some trailers, below... 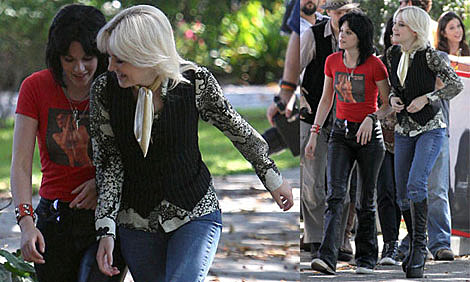