The Budos Band in Prospect Park (more by David Andrako) 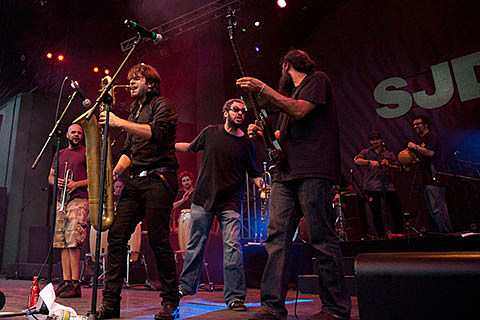 The Budos Band celebrated the release of their new LP The Budos Band III at Southpaw last week (9/18), and now will wreck Bowery Ballroom on December 3rd. Tickets go on sale AmEx presale today at noon, and then general sale Friday at noon.

Its easy to tell that a heavy influence on the sound of The Budos Band is Nigerian legend and subject of a Broadway musical, Fela Kuti. In recent weeks, FELA! has taken both a big step forward and a huge step back; R&B legend Patti Labelle recenlty joined the cast of the acclaimed musical, but unfortunately the show will close during the first week in 2011. Boo.

If you haven't seen the show yet, you should. If you can't afford it, then take note: you can get a taste when members of the cast play a FREE show at Brooklyn Bridge Park's Pier 1 on October 4th. Patti won't be there, but FELA! star Sahr Ngaujah will be, alongside the FELA! house band (which includes members of Antibalas Afrobeat Orchestra). The show kicks off at 6:30 P.M. More details can be found at the St. Ann's Warehouse site.

In related news, the non-profit Hip-Hop Theater Festival is celebrating its 10th anniversary with a gala at Urban Zen Center at the Stephan Weiss Studio (711 Greenwich Street NYC) on on 9/27:

From 7-8pm VIP guests will be able to enjoy a rooftop reception before general admission. Doors will officially open at 8:30pm, followed by performances from Pulitzer finalist Eisa Davis and Tony Award winning poet Lemon Anderson. A presentation honoring playwright and poet Ntozake Shange and graffiti pioneer artist Enrique PARTONE Torres will then ensue. Sahr Ngaujah of FELA! on Broadway will host the special evening with music provided by DJ Rich Medina.

Tickets are $100 for general admission with $250 for VIP for a rooftop reception & reserved seating. For more ticket information please email info@hhtf.org or call 718.407.4282

The Budos Band recently performed live for KEXP in Seattle. Video below...