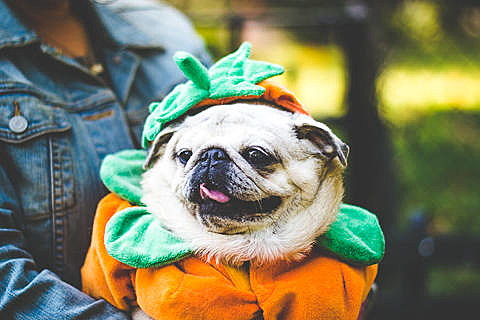 No longer content to celebrate Halloween just on October 31, NYC has turned into a full week of festivities. We're mainly focusing on the music stuff, but a list of notable events follows...

First and foremost in the 41st Village Halloween Parade, which gives parades a good name and is usually worth going to. It happens on 6th Avenue North of Spring Street to 16th Street from 7 PM - 10:30 PM. And if you can't actually be there, NY1 broadcasts live from 8 PM - 9:30 PM.

As for music events, with a singer who has basically dressed like a vampire for the band's career and classic singles "Thanks for the Night," "Wait for the Blackout," and "In Dulce," The Damned remain perfectly suited for this sort of thing and you can see them at Irving Plaza on Halloween with TSOL (who have a horror punk vibe themselves), and The Briefs. (tickets). If you'd like to go for free, we're also giving away a pair of tickets. See details below.

Meanwhile, Damned guitarist (and maker of great solo records too), Captain Sensible will be playing a Halloween edition of the Sally Can't Dance party at Bowery Electric on Wednesday (10/29) with Fred Armisen, Mistress Formica and more (tickets).

On a similar tip, the Jerry Only-led version of Misfits play Irving Plaza tonight (10/28) and tickets are still available.

Meanwhile, former Misfit Glenn Danzig will be playing with his band Samhain at Best Buy Theater on the actual night of Samhain (the night after Halloween) (tickets).

And another former Misfits singer, Michale Graves, plays Coco 66 on Mischief Night (10/30). Tickets are on sale.

Primus will be playing Beacon Theatre on Halloween which is being billed as "An Evening With Primus and the Chocolate Factory." Primus just made an album based on Roald Dahl's classic children's book which definitely has some nightmare material in it. Tickets are still available.

Punk/klezmer/cabaret act World Inferno Friendship Society are throwing a "Hallowmas" bash at The Wick on Halloween. They are requesting you bring a pumpkin. Tickets are on sale.

CMJ buds Panache & Baby's All Right are thowing a Halloween Show that's not at Baby's -- it happens Halloween Friday at 338 Moffat (Studio L) with Purling Hiss, King Gizzard & the Lizard Wizard, Meatbodies and Tonstartssbandht. Tickets are on sale now, including an option that includes a "limited edition surprise."

What will be at Baby's though is a dance party with Maurice Fulton, DJ Spun, Alex From Tokyo, The Almond Brothers and Paul Raffaele (tickets).

For an Halloween filled with current bands evoking the goth sound of the classic '80s period, Toxic Shock Syndrome is presenting "DEA†H ☧ RI†ES" on Friday at 496 Morgan Ave with Pop. 1280, Void Vision, Pawns, a DJ set by Frankie Teardrop and "more!" Tickets are on sale.

And then there's the Halloween show at Death by Audio with Knyfe Hyts, Oozing Wound, The Fucking Ocean, Red Dawn II and Alien Whale, plus in the "Haunted Mansion" there will be Aa, Justin Frye (of PC Worship) and Chat Logs. This will be your last chance to party at DbA on a Halloween as the venue closes in less than a month.

This year's Zombie Prom happens at Littlefield on Halloween with The Hollows, Sylvana Joyce & The Moment, Corn Mo, and T.R.J.B. (tickets).

Anamanaguchi will be DJing on Halloween at the 38 Bathhouse (353 Broadway, Manhattan) with Tallesen, Pleasure Centers, Bernard Herman (not the Hitchcock composer [who's dead]), and "Very Special Guests." Tickets are on sale.

Brooklyn Night Bazaar is throwing a two-night Halloween party on Friday and Saturday (11/1). Friday has Diarrhea Planet, Hop Along, Desert Sharks, Mitski and Banker$ DJ; Saturday has The So So Glos, Slothrust, Dinowalrus, Weird Womb and DJ Lady Guy. Both nights are free with costume contests ($500 cash prize).

And Long Island's The Paramount on Halloween is hosting Mastodon, Gojira & Kvelertak (tickets). The same lineup will play The Starland Ballroom in NJ the next night (tickets).

The Meat Puppets / Cass McCombs co-headlining tour hits NYC twice at Rough Trade this weekend. First on Halloween night (tickets) and then again the next night (sold out).

If you're the type who wants to hear post-rock on Halloween, you're in luck because This Will Destroy You's tour hits Bowery Ballroom that night (tickets).

And for you Twin Peaks fans out there, Glasslands is offering up a party called "Halloween In The Black Lodge," with a place both wonderful and strange performing a piece called "EYS OPEN DOORS: THE HIDDEN LIFE OF LAURA PALMER" as well as DJ sets by @Thatsourwaldo, and Smoking Mirror (Lewis Valleau of WOLVVES). Tickets for this midnight party are on sale now, though if you're name's Bob you may know another way in. 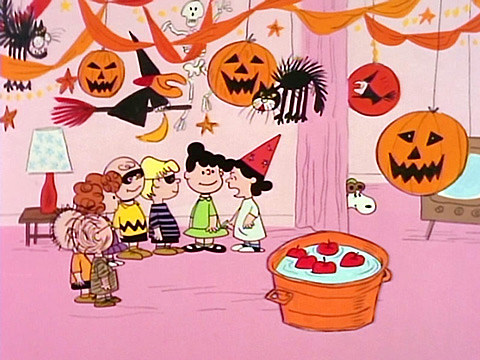 Of course the staple of Halloween shows is bands performing as other bands, and there are no shortage of those this year. You can get an early jump on that sort of thing on Wednesday (10/29) at Baby's All Right with Motion Studies (as Prince), Sunflower Bean (as Smashing Pumpkins), Dances (as The Strokes), Haybaby (as Yeah Yeah Yeahs), Scherzo (as Death From Above 1979). Tickets are on sale.

Then on Devil's Night (Thursday, 10/30) at Saint Vitus, Delicate Steve will be performing as Del Zeppelin with sets from Escalator Haters (Featuring members of Stalkers, Daddy Long Legs, The Casualties and Clit 45), Ice Balloons and Cher2K. That's a free show.

Delicate Steve will then perform as the Red Hot Chili Peppers at Silent Barn on Halloween (with RHCP touring member/Atoms for Peace member Mauro Refosco) along with Dear Leader (as The Neptunes), Heeney (as Weezer), Banned Books (as Pixies), Advaeta (as HOLE), members of Celestial Shore, Heaven's Gate and Journalism as blink-182 and a DJ set from Mr. Twin Sister.

For a different option that also features a band as Blink-182 head to Cake Shop on Halloween for Clean Girls who will be doing that, plus Vomitface (as Nirvana), Alien Trilogy (as Devo), Tape Deck Mountain (as Daniel Johnston's Delay Pedal), Death To Slater (as The Beach Boys), Schmear (as Meat Puppets), and Smell-O-Vision (as Television).

For a third blink-182 option and a second RHCP option, over at Shea Stadium on Halloween you can see Big Ups (as Red Hot Chili Peppers), Vulture Shit (as Presidents of USA), Flagland (as Blink-182), Bueno (as Frank Sinatra), and Huffers (as The Replacements). $8 at the door with costume, $10 without.

You can see Beach Fossils with members of Wild Nothing (as Devo), Celestial Shore (as T. Rex), Beverly (as the Pixies), and Roya (as Television Personalities), on Halloween at 338 Moffat (Studio E, different space than Purling Hiss show mentioned above). Tickets for that show are on sale.

You can also catch Mutual Benefit doing Beck's One Foot in the Grave in full at Glasslands on Halloween with Reo appearing as Lana Del Rey and Conveyor are doing an all-Buddy-Holly set (tickets). That's your last chance to ever see a Halloween show at Glasslands. We're giving away tickets too.

If you're looking to dance, you can head to Cameo on Friday for Eric Duncan, Mike Simonetti, Dominique Keegan, Justin Vandervolgen, Evan Michael, Free Magic, and Faso (tickets)

Output on Halloween is throwing a "Boo Yourself" party with Danny Tenaglia and Rissa Garcia in the main space and Kasper Bjørke, Gerd Janson, and Justin Miller in The Panther Room (tickets).

The Check Yo Ponytail tour also rolls through NYC on Halloween which should definitely be a party. That happens at Warsaw with The Presets, Antwon, Chela and Franki Chan (tickets).

You can also turn down for what at Pier 94 on Halloween (moved from Barclays Center) with DJ Snake, Knife Party, Tommy Trash, Tchami and Milo & Otis (tickets).

On the movie front, Nitehawk Cinema is doing their all-night horror marathon "A Night to Dismember" with a program of sequels: Evil Dead II, The Bride of Frankenstein, Friday the 13th: Part 2, Dracula: Prince of Darkness, and Return of the Living Dead (tickets)

Videology (which has been hosting horror screenings all month) is showing '80s Tawny Kittaen classic Witchboard; and at Sunshine Cinema in the LES they're hosting a midnight screening of 1987 cult classic, The Monster Squad (tickets).

What else? A couple flyers, and some Halloween mixes courtesy Rdio, below...

======================
For a chance at winning a pair of tickets to see THE DAMNED AT IRVING PLAZA: either tweet something that includes both @BrooklynVegan AND "THE DAMNED" in the tweet, or send an email to BVCONTESTS@HOTMAIL.COM with the subject line "THE DAMNED". Include your first and last name in the email. We'll pick a winner at random and contact them with more details. If you enter by email, it will not be shared with anyone else. Good luck!
====================== 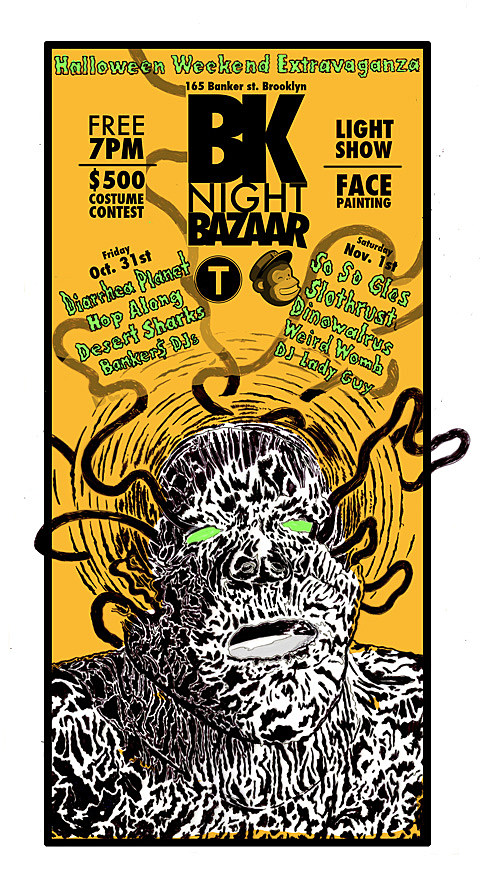 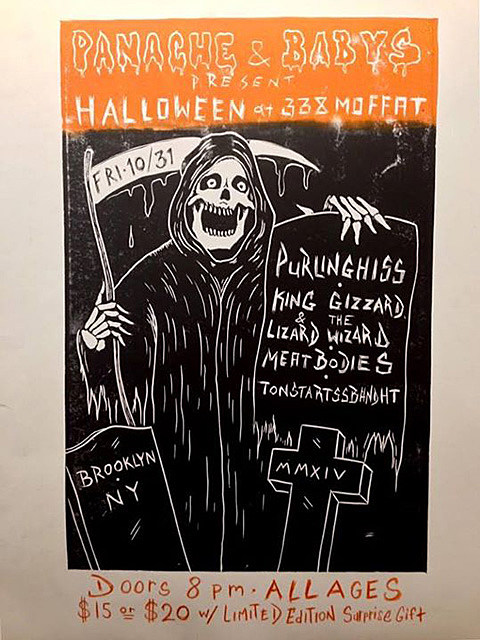