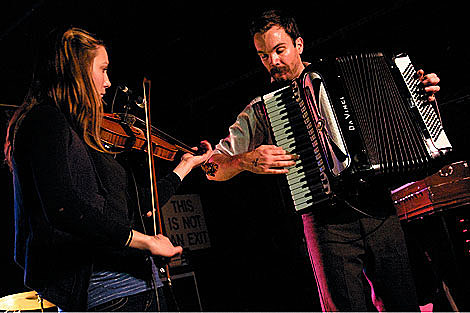 The bond between Jeremy, Heather and their Hungarian associates finds glorious voice on Délivrance. "The songs were all written and inspired by our time there. It felt like we were trying to document what we had learned and played in Eastern Europe. So we tried to get everyone we had played with on the album, plus a few people whom we love and admire," Heather explains.

Recorded in Budapest during mid-2008 around the core of the Hun Hangár group, with a variety of specialists (Jeremy would often take the train to different places around the city and record musicians like Kálmán Balogh, one of the world's foremost gypsy cimbalom players), it is wholly evident that months of being submerged in the local culture and making music the focus of daily life has seeped right through Barnes and Trost's songwriting and playing. This is by far their most vivid, intense and confident work to date. [neufutur]

That record comes out August 25th (in North America, it's already out overseas) on Leaf Label.

The band will be touring North America this fall. Joining them on most dates will be Damon & Naomi. Both groups will be at a Sepember 19th show at NYC's (Le) Poisson Rouge. Tickets are on sale.

Damon & Naomi are releasing a comp of their four Sub Pop albums (put out between 1995-2002) on an appropriately titled collection The Sub Pop Years, which comes out September 8th on 20/20/20. They also have a DVD, "1001 Nights," due September 29th on Factory 25. That disc is touted as "a comprehensive anthology of the ethereal Damon and Naomi with videos and live performances by the duo from 2001 through 2009."

Before their duo days, Damon & Naomi used to be in Galaxie 500 (a trio with Dean Wareham of Dean & Britta who are playing Prospect Park on Saturday). All three of Galaxie 500's studio albums were recently remastered and re-released as vinyl and mp3s available through the band's own online store.

All tour dates and videos from AHAAH's Délivrance are below...