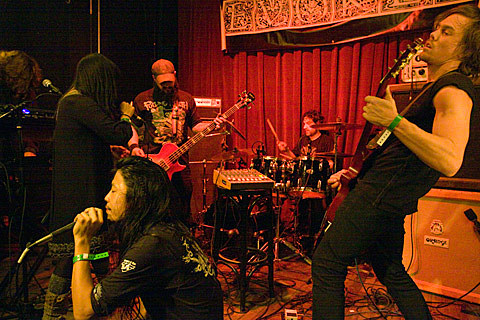 This post was so big we split it into two. Part one is HERE. Part two continues below...

--
Jucifer on stage with their modest system (more by Samantha Marble) 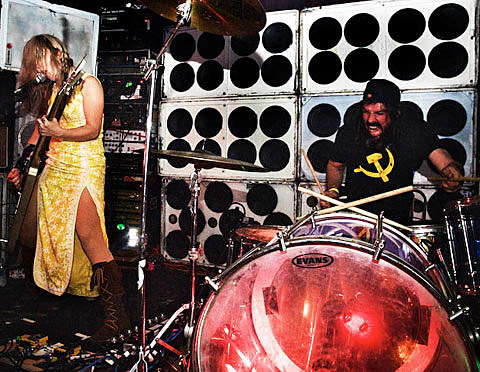 Favorite things in 2010 by Gazelle Amber Valentine of Jucifer

Ten favorite things:
1. the birth of our label nomadic fortress - a capricorn, like mom. (horns!)
2. hanging out on slayer's bus behind the enormodome in fort wayne,indiana - but not being able to stay for their set because we had to go set up our own show across town (*tears hair out*) - but then having dave + jeff bring most of the slayer road crew to our show at the brass rail...to the pleasant surprise of our crowd (*bows*) weeeeer nooooot worthyyyyy
3. our first mdf
4. eyjafjallajokull - because by some weird fluke i actually learned how to spell it. +because it kinda seemed to bring everybody together as tour cancellations poured in and people helped however they could. +because massive volcanic explosions are simply fuckin' cool.
5. two days off in rome during the jucifer/grayceon/darsombra european tour, in which we stayed in a tiny six-bunk-beds room on the third floor of a hostel (incredibly named pink floyd) and saw amazing ancient ruins during the day, and had hilarious wine-fueled slumber parties at night
6. also from that tour, the legend of the sockhole
7. getting a droid and finally joining the world of social networking. (i still don't have an ipod)
8. in british columbia, going to a birds of prey exhibition where hawks flew about a foot over our heads
9. in bowling green,ohio, realizing that the restaurant across the street from our venue was entirely vegan + eating some crazy good seitan/bbq/thousand island dressing kinda sandwich which dripped everywhere... then vegan "snickers bar" for dessert
10. that prevailing fruit of the loom commercial with the mock rock video that ends "i don't care whatcha wanna wear down there" 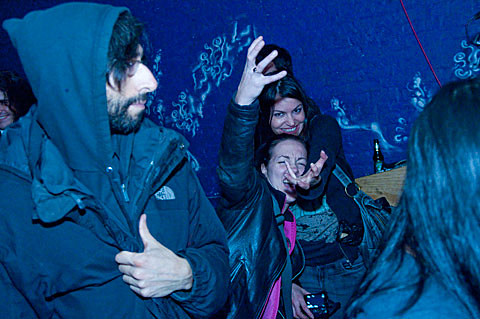 Best of 2010 by Samantha Marble

Other Heavy Favorites:
Swans - My Father Will Guide Me Up A Rope To The Sky
Wovenhand - The Threshing Floor
US Christmas - Run in the Thick of the Night
Killing Joke - Absolute Dissent 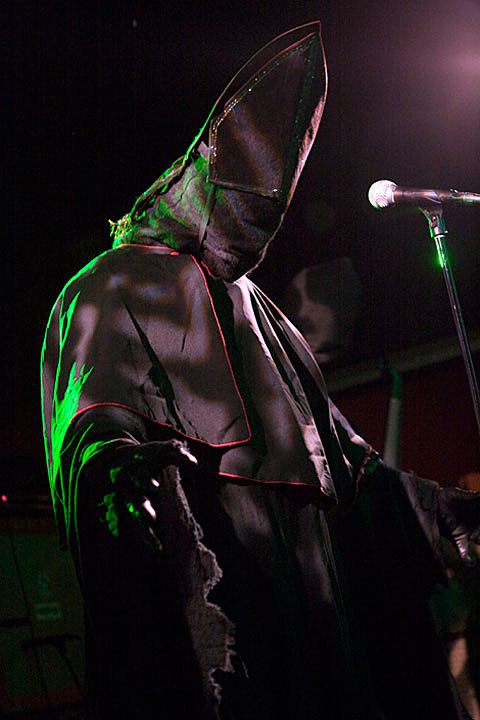 --
Top 10 shows/memories/monumental moments of 2010 by Joanne Filipone (Osiris)
(in chronological order)
1. Osiris/Brooklynvegan: Unsane, Made out of Babies, United Nations, Dark Vibe at Union Pool.
How many homies can you fit in one room?
2. Osiris/BV: Ludicra, Krallice, Castevet & Atakke @ Europa
Ludicra blew everyone's minds, all the other bands killed it. And it was my birthday show. ***Atakke have played a few birthday shows of mine and sad to say that was the last time....
3. R.I.P Ronnie James Dio
4. Portal, Watain & Coffins @ MDF (Portal blew my mind with their insane captivating stage performance.
Watain always are amazing, dark and evil)
5. Osiris/BV EYEHATEGOD, Brutal Truth, Nachtmystium, Black Anvil, Tombs @ Europa. Eyehategod pretty much killed it and seemed to be reading all of our minds as they played every song our vibes willed them to play.
6. Meeting Slayer @ Heavy MTL in Montreal.
7. Osiris: High On Fire, Unearthly Trance, Natur @ Music Hall
I've seen all of these bands a gazillion times and that one reigned above them all.
8. Osiris/BV: SLEEP @ the Masonic Temple.
The "bros-for-life" chemistry between Al Cisneros and Matt Pike intensifies and feeds both of their respective ingenuity and performance. Neurosis's Jason Roeder proved to be the perfect fill in for Chris Haikus on drums. These shows ruled as the best of the year.
9.Swans @ Masonic Temple
Jaw dropping to say the least.
10. R.I.P. Jean Paul "J.P." "Jipp Dawg" Toulon.
Singer of Old Skull, Planned Collapse, long time bro, one of the best dudes ever.

****Honorable mention to the last ever show for my all female Slayer tribute band, Slaywhore.

--
My Top 10 Music Moments of 2010 - Zena Tsarfin of ZenaMetal.com, @zenametal
1. ATP New York, for so many reasons. Besides the mind-blowing lineup (Sleep, Iggy & the Stooges, Shellac, Altar, etc.) and the massive ear-destroying sound, ATP NY helped restore my faith in the idea of music festivals. Being in the Catskills didn't hurt, either.
Special thanks to BBG and Ms. Marble for letting me in on their adventure--even if we never seemed to have enough lighters. Props to Nicole for letting a complete stranger stay with her.
2. Eyehategod's show at Europa for still giving me goose bumps after all these years.
3. Deftones' Diamond Eyes for being the sleeper hit album of the year.
4. Dax Riggs' Say Goodnight to the World and live at Mercury Lounge (even if he didn't play "Radiation Blues").
5. Grinderman's sophomore album and seeing them live at Best Buy Theater. Having Nick Cave sing into my face is on my newly minted bucket list.
6. Karma to Burn, alive and healthy, and laying down heavy grooves on Appalachian Incantation.
7. Rediscovering Concrete Blonde's early albums after being blown away by their Webster Hall set--though the initial draw was seeing Bloodletting performed in its entirety. Johnette Napolitano is a powerhouse.
8. Getting my 14-year-old niece into her first show, My Chemical Romance at the P.C. Richard & Son Theater. She stood in VIP and took a photo with the whole band, making her Facebook profile pic the envy of all her SI classmates.
9. Interviewing Ratt's Stephen Pearcy and telling him all about Ratturday--a weekly stoner sacrament hashed out by MetalSucks.net's Vince Neilstein, Relapse's Juggalo Bob and yours truly--and him not giving a shit. Yet the tradition continues.
10. Weedeater at the Studio/Webster Hall for the good vibes sizzurp party.
--
PART ONE OF THIS POST IS HERE
--