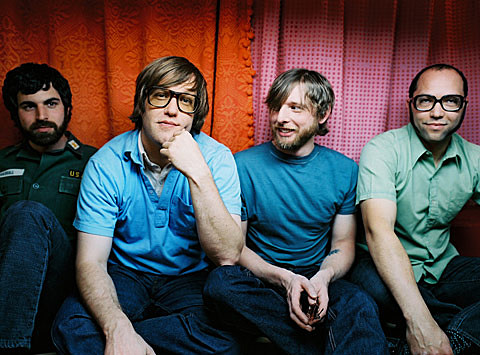 The Long Winters frontman John Roderick will play a few shows with Aimee Mann in January followed by a headlining show at Mercury Lounge on 1/28/12. Tickets for the NYC show are on sale. All dates are listed below.

1/28 is the same date that Aimee plays a NYC show at Zankel Hall which is one day after she plays Music Hall of Williamsburg (both shows are without John and now sold out or close to sold out). Aimee has also announced a NJ show in Red Bank and other dates since we last spoke. They are all listed below.

Back to John Roderick for a second. You can buy his guitar on eBay...

Do you want to play guitar like John Roderick? Sorry, can't be done. But, you can play his guitar as much as you'd like! Just win his solid body Hohner EX Artist electric guitar, whose unique sound has appeared in The Long Winter's recordings. Small Print: Guitar has been used. It's got a few scrapes (nothing that's visible from a stadium seat - see photos), needs a set-up (easy!), but has been lovingly modified - with embellished pick-ups (blood red nail polish, an 80's classic). Comes with a Gibson Explorer Guitar case (some use on outside, but like new on inside with instructions for programming the unused combo lock). Don't let THIS ONE get away. Donated by John to benefit Suz, all proceeds help her recover from severe illness. Thanks for lookin'!

John has also been keeping busy collaborating with Jonathan Coulton. John appear's on Jon's new album Artificial Heart, as do Sara Quin of Tegan and Sara and John Flansburgh of They Might Be Giants who Jonathan is opening for at Terminal 5 in NYC on March 10th. Tickets are still on sale. TMBG have also announced more dates since we last spoke, They're all listed below.

Roderick also appears in Coulton's new video for "Nemeses" which came out before the even newer Coulton video for "Sticking it to Myself", both of which can be watched, with all the tour dates below...

Jonathan Coulton w/ Phil Hernandez - Sticking It to Myself