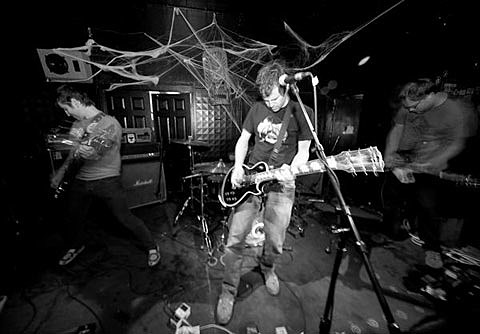 Much like Wolvserpent recently did, I propose Kowloon Walled City change their name. After being bludegeoned by their recorded output, it's obvious that the band name should probably be Kowloon Walled F'N City.

And now the newly f'n renamed (by me) KWFC has a new f'n release under their belts, a three way split with Fight Amp and Ladder Devils perfectly titled Lose/Lose/Lose. Due on Brutal Panda Records in September, the limited-to-300 12" features two tracks from each band, and is "packaged with a special silk screened poly bag and a 12"x16" fold-under insert". Preorder it now, and dig on a pair of tracks from that LP above including "The Commuter", which makes its first appearance above (both are also streaming below).

Kowloon Walled City will play NYC TWICE with Batillus in the coming months as part of BV/1000 Knives events: Cake Shop gets 'em on 9/18 with Riff Cannon and Acheron gets a piece on 10/2 with Liturgy. Full KWC/Batillus dates, a stream of the above tracks, as well some video are all below.