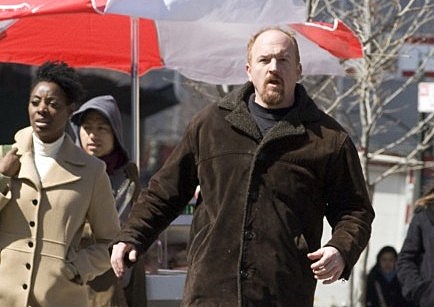 Louis CK was set to wrap up his run at the New York City Center tonight but has postponed until March 2. Here's a letter he wrote about it:

Okay. I thought about this very carefully and I really started to worry about making 4300 people come into midtown manhattan on Sunday night, which is just when the stormatron 5000 is supposed to crush our empire. Things i worry about include that Mass transit might shut down in all of New york, at 7pm tomorrow, stranding everyone who comes to the shows and that the second show ends at midnight, sending people back home just as it's starting to pick up.

I know that a lot of people are excited to come and they are fine with taking the chance but I really don't want a pole to smash your face in because you saw some comedy.
So i asked the City Center (where the shows are supposed to happen) if we could find another date for tomorrow's shows and they gave me March 2nd. The City Center, being really cool, has agreed to let us do the shows on that night and your tickets that you now hold will be honored on that night. the same seat, same everything. If you can't come on that night, we will either do another show soon after that, or find another show for you in the area in the future. Or you still have the option to get a full refund for your ticket. If you already asked for a refund, we can reinstate your ticket if you want to go to one of those shows.

Listen. I know that probably tomorrow it's going to be a starry clear night and the trains are going to be just gliding up and down the traks and a baby zebra is going to whinny as he trots by the City Center on a night that is going to break records for being placid and perfect for a night of comedy. And I'm going to feel like an asshole. And I know that some people had their plans set and are going to be pissed off at me. I know. but I also know that some of you are struggling with whether to come in or miss the show and this is the closest I can get to a solution. You don't have to take a chance and you don't have to miss the show. Just come see me in a few months.

If it's any consolation, I'm eating a pretty staggering fee for cancelling the show. But I can take it. What I can't take is the thought that there's a CHANCE 4300 people will be in danger trying to get home from my stupid show.

Please email molly@etix.com and tell us what you want to do, and ask any question you have.

So that's that. Cancelled. Rescheduled. Please forgive me. Please be safe.

Lots of other stuff is cancelled too.