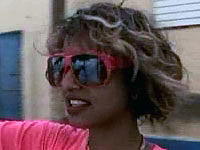 M.I.A.'s first album bombed in sales given all the hype, and I think this one will do even worse, and HERE'S WHY. I was fairly psyched to watch the Boyz video on BV today, but about 1/4 through I was insanely bored with it and had to stop watching. M.I.A.'s first album was so great because it was so weird for the time, but now mainstream R&B has gotten so weird in its production itself (your Timbalands, etc) that M.I.A. doesn't have that angle anymore of sounding unique and like nothing else. She's just another rapper/singer, and SURPRISE, her voice isn't good. Without being distracted by all the fancy and crazy blips and bloops, you realize she's just not much else. More proof of mainsteam R&B being the new hipster music, and teenage girls being way ahead of anything Ed Banger is gonna throw at you. Wouldn't you rather listen to pretty much anything by Rihanna than the new MIA? Just my two cents.