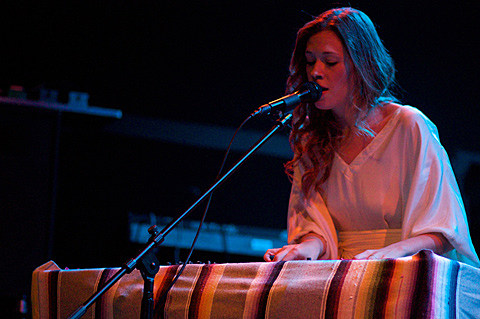 As mentioned, and again, and again, Brooklyn's own folk siren Lia Ices will sing and play piano with her band at Mercury Lounge in NYC tonight (12/14). She shares a bill with her label-cousin Sun Airway (and Mike Wexler and Sebastian Blanck), and it will be her final show of the year and her first since CMJ when she suddenly started getting a lot of attention... which, in addition to her enormous talent, was partially related to the fact that she signed to Jagjaguwar who are putting out her LP, Grown Unknown, on January 25, 2011. "Daphne" off that album can be downloaded for the first time, above. You can also stream it below. Listen for Justin Vernon aka Bon Iver during the second half of the track.

The handclap-featuring "Grown Unknown" from the same album can be grabbed above also. All of her upcoming dates are below too...