This year's line-up is pop-solid and we're giving away a Festival Pass that will get one person into all four nights. Just send an email to BVCONTESTS@HOTMAIL.COM with the subject line "POPFEST" and we'll pick a winner at random and notify them Wednesday night (tonight). Please note, some of these Popfest shows are 21+.

Festival passes are otherwise sold out, but there are currently still tickets available for all four shows, though I think you might want to act quick on the Cake Shop (5/20) and Don Hills (5/21) shows as they're at small venues. Here's an overview of what's going on, complete with MP3s for almost every band playing (above). 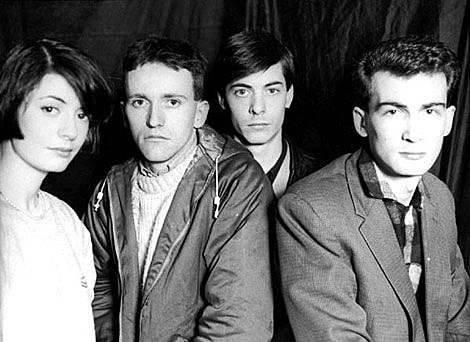 Popfest organizers scored a coup getting Scottish indiepop legends The Wake (not the American goth band of the same name) to play the big Saturday (5/22) show at the Bell House. While they the attention their Factory Records labelmates New Order and Happy Mondays (or even A Certain Ratio) received, their catalog is well-regarded, especially 1985's Here Comes Everybody which is a bona fide  indie classic. Check out "O Pamela" at the top of this post. The band's hazy, reverb-laden sound has parallels to current bands like The Radio Dept or Wild Nothing, or any of the chillwave groups out there.  The Wake are working on a new album due out this year. This is their only U.S. show. Stick around after The Wake's show for a DJ set from Victoria Bergsman. 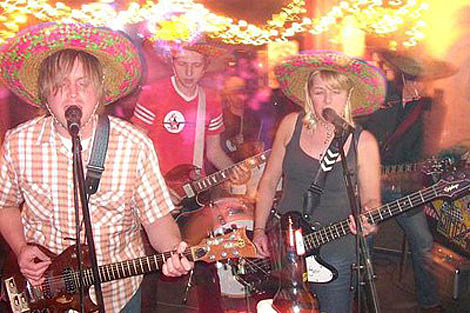 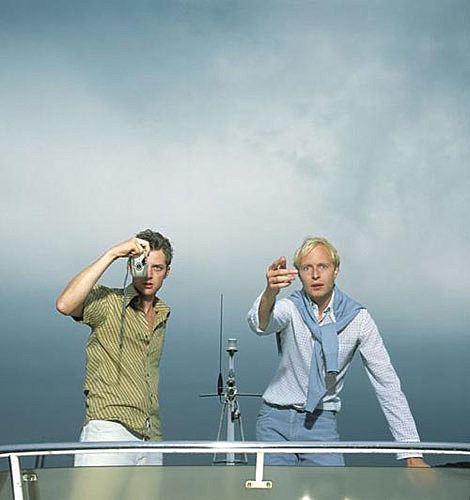 At the all-day Sunday (5/23) show at The Littlefield show features the first and only U.S. performance by enigmatic Swedish duo The Embassy who's music is somewhere between indiepop and Balearic disco. I liked 2005's Tacking which came out on the Service label, home of Jens Lekman, Studio and The Tough Alliance. Check out "It Pays to Belong" at the top of this post. but the band have been rather quiet since. Maybe we'll find out what's going on with them at the show.

Then there's Veronica Falls play the 5/20 show at Cake Shop. Maybe you saw them this past weekend when they played Glasslands on Saturday and Bruar Falls on Sunday. Their Glasslands performance was great, and they were surprisingly rockin', given the gentle nature of some of their recordings. Singer/guitarist James Hoare is a student of the David Gedge school of manic strumming, especially on their "Found Love in a Graveyard" single that becomes almost like an extended VU jam onstage.

Singer Roxanne Clifford and drummer Patrick Doyle were both in Glasgow's The Royal We, whose singer Jihae is now in Neverever who will play the Littlefield show on Sunday. The band also features her n0w-husband Wallace Meek who was in fellow Glaswegian band Bricolage but they now call Los Angeles their home. The band's debut, Angelic Swells, is out next week on Slumberland and is fairly indebted to '60s girl groups. Check out "Blue Genes" at the top of this post. I'll admit that part of me hopes we'll get a Veronica Falls/Neverever supergroup to play Royal We's awesome single "All the Rage" (the band never played America) but I'm not holding my breath. 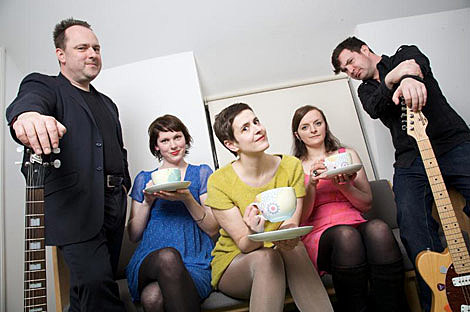 Tender Trap play the Friday (5/21) show at Don Hill's which is also the bi-weekly Mondo! party. Not to be confused with anthemic Australian band The Temper Trap, The Tender Trap features Amelia Fletcher and Rob Pursey who were both in iconic indiepop bands Tallulah Gosh, Heavenly and Marine Research. I was a big fan of their last album, 2006's 6 Billion People, Their new album, Dansette Dansette, is out June 22 on Slumberland Records and you can download "Girls with Guns" from it at the top of this post.

Recently added to Tender Trap's lineup is Elizabeth Darling of Allo Darlin who also play the Don Hills/Mondo! show. Their debut album is out June 7 (in the UK at least, not sure if anyone's grabbed it up stateside) and is full of bouncy and charming guitar pop not too far removed from Belle & Sebastian. Their single "The Polaroid Song" is one of my favorite tracks of 2009 and you can watch the Breakfast Club homage video for it at the bottom of this post. And you can download a couple tracks from the album at the top of this post. Allo Darlin are also making the most of their trip, playing a short East Coast tour. Dates are at the bottom of this post. 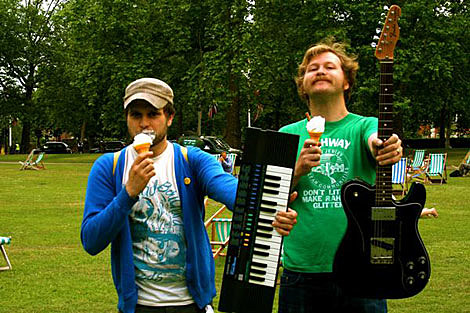 Allo Darlin's Will Harrison also plays in Moustache of Insanity who are playing the free daytime show on Saturday at Spike Hill. Sometimes compared to Moldy Peaches, the band should provide some levity (and cheap keyboards) to the proceedings. Check out "Amazon Wishlist" at the top of this post for an idea of what you're in for, and if you want to hear more, you can download a zip of their new EP here and there are loads of downloads via their website. 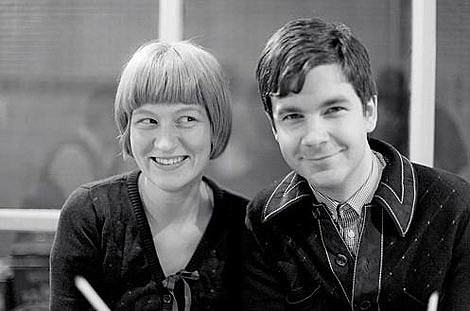 And it wouldn't be a Popfest without some Swedish bands. In addition to The Embassy, there's Leaving Mornington Crescent who play Cake Shop on Thursday, and A Smile and a Whisper at Littlefield on Sunday.

The Don Hill's show on Friday will be the last-ever NYC show for Boston's Pants Yell! who are splitting up after playing a farewell show in their hometown next week.

One of the many highlights of The Bell House show is Seattle's BOAT who will play some non-popfest shows too. 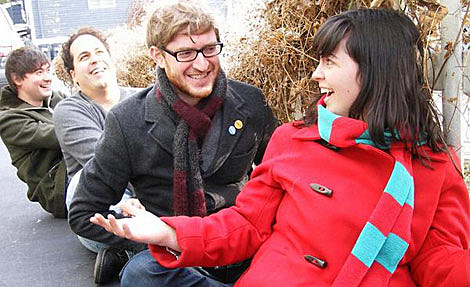 This will be the second year in a row at Popfest for Chicago's Very Truly Yours, who are playing the e debut LP was just released this spring. You can download at track from it at the top of this post. Recommended if you like winsome, Camera Obscura style. pop.  Also back from last year are Vermont's Smittens (5/21 Don Hill's), and it will be the second Popfest for Boston's One Happy Island who last played it in 2008 and play this year at the Saturday afternoon free show at Spike Hill. Check out "Temporary Tattoo" at the top of this post.

There's a few animal bands (in addition to Bunnygrunt): Cleveland, OH's Bears, who play the Bell House show (5/22), are lush and lovely with gorgeous harmonies. Check out "Wait and See" at the top of this post, whereas Gold Bears (Spike Hill, free day show 5/22) from Atlanta, are more in the shambly tradition of The Shop Assistants and Boyracer. Then there's local duo Elephant Parade (Cake Shop on 5/20) who play laptoppy folk, and the Sea Lions (Oxnard, CA playing the Sunday show at Littlefield) evoke comparisons to the Pastels and The Clean. 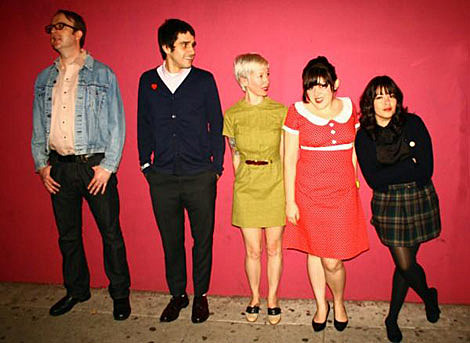 More out-of-town American bands: Sweater Girls are from Los Angeles and feature Allan Kingdom of C-86-era UK group The Siddelys; and Santa Monica Swim & Dive Club are actually from Michigan and play super-twee acoustic pop; The Young Friends are from Arizona but sound like Scotland 1980; and Apple Orchard hail from Richmond, California and make dreamy, Field Mice-ish pop (lots of free MP3s on their website).

Florida's For Ex-Lovers Only named themselves after a Black Tamborine song and kind of sound like that too. They play Littlefield on Saturday.

Opening the Don Hills show on Friday are Cotton Candy, which is Mark Robinson's current band that also features his wife. There's more a capella covers of old commercial jingles than you might expect from the former frontman of Unrest (who are reforming briefly).

And of course NYC is well represented. In addition to previously mentioned Elephant Parade, indiepop stalwarts My Teenage Stride, who are the only band to have played all for NYC Popfests, will play the big Bell House show on Saturday, as do World Atlas (NYC's answer to Belle & Sebastian); Dream Diary (NYC's answer to The Pastels/Field Mice) play Cake Shop on Thursday, and the shoegazy Corita play the free Saturday afternoon show at Spike Hill. And The Secret History make their third appearance at the Fest at Littlefield on Sunday.

Ok, I think I got everybody in there. Day-by-day Popfest schedule, plus some other tour dates and videos after the jump. 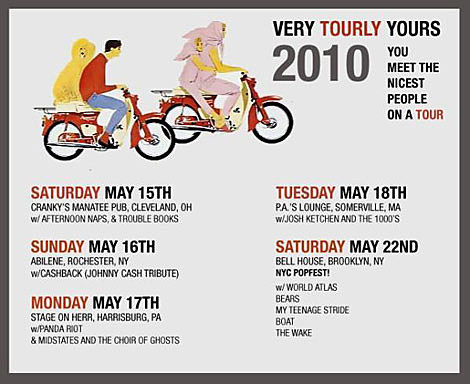 The Tender Trap - Girls with Guns

For Ex-Lovers Only - Coffin

For Ex-Lovers Only "Coffin" from Magic Marker on Vimeo.

Horowitz - I Need a Blanket

Pants Yell! - Somebody Loves You 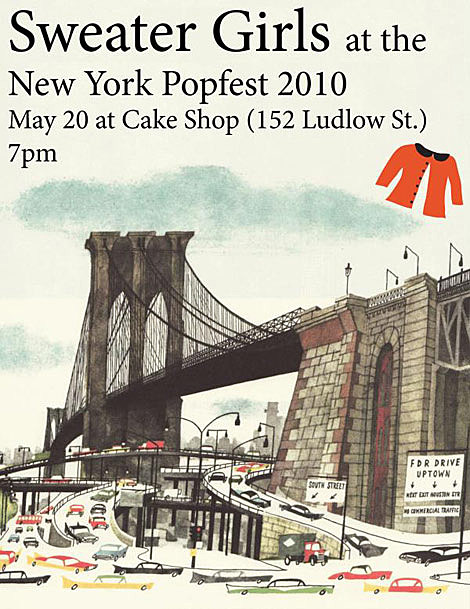