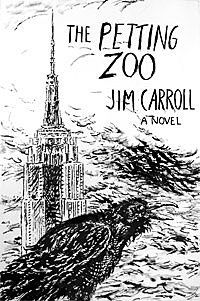 "Basketball Diaries author Carroll's slightly rough posthumous novel about a famous painter's breakdown begins as painter Billy Wolfram has a psychotic episode, wanders about the Central Park petting zoo, threatens strangers, and is picked up and committed to a mental hospital for observation. Upon his release, Billy returns home and goes into "reclusion," brooding on events in his past (such as his mother's death), watching old TV shows, and receiving visits from a Central Park zoo raven who talks to Billy about the flood (the raven was on Noah's ark), art, and the emptiness in Billy's life. Other than his assistant, Marta, Billy's only real visitor is his childhood friend, rock star Denny, leaving him plenty of time for introspection that leads back to Kennedy's assassination, which coincided with Billy's mother catching him masturbating. Since then, Billy has frozen out his sexual feelings, and, as it turns out, Marta would love to thaw them. Although Carroll's prose is uneven--clever and profound sentences jostle awkwardly with lumbering, bathos-soaked platitudes--and the narrative tension is rather slack, this is a heartfelt portrait of a New York original by a New York original."

That book was just released and fellow downtown icons Patti Smith and Lenny Kaye will help publicize it and honor Jim at an event at the Union Square Barnes & Noble on Thursday, November 18th at 7pm.

Meanwhile you can catch Patti and Lenny at an event happening at Southpaw in Brooklyn TONIGHT (11/11), which strangely still has tickets available, unlike Patti's three shows coming up at Bowery Ballroom.

Lenny Kaye recently appeared at City Winery with Bob Mould who played a show at the Rock Shop right after. Video of Jim Carroll playing with Lenny Kaye years ago, below...