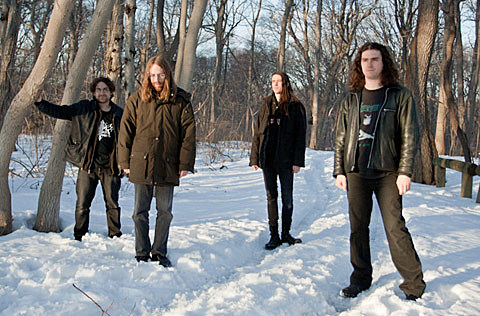 Tickets are on sale for the Sleep show coming to Terminal 5 on June 22nd. Openers still haven't been announced, though Magrudergrind was added as support for the Floor show coming to Music Hall of Williamsburg on April 13th. Tickets are still available for that too.

Tickets are now on sale for the Converge, Trap Them & Dropdead show at Santos Party House on May 25th.

Tickets are also now on sale for the previously discussed Krallice/ Withered/Ipsissimus/ Cleric May 2nd show at The Studio at Webster Hall. It's one of two NYC dates on the calendar for Krallice (who play Union Pool on 4/20 in honor of Brendan of Orphan).

Ipsissimus killed it at Union Pool on 3/27 with The Funeral Pyre & The Secret.

The Krallice tour with Withered is in preparation for Krallice's newest marvel/LP, Diotima, which drops via Profound Lore on 4/26. Diotima is more of the dizzying, well-crafted, intelligent and complex black-metal that marked their previous two releases with Profound Lore. The Brooklyn now-veterans (three albums in three years? the Jay-Z of USBM, anyone?) have perfected the art of brutal technicality as you can hear in "The Clearing" and in the punky/powerful second track to be released, "Litany of Regrets" which premieres in this post. Download above. Stream below.

All Krallice tour dates and the song stream is below.