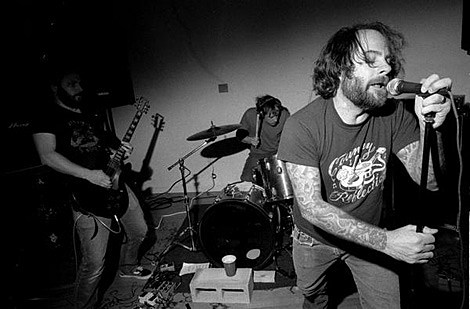 Although he plays (an oddly outfitted) bass in Lightning Bolt, Brian Gibson is the DRUMMER for Megasus.

While Lightning Bolt toils in the outer reaches of spazzy noise, Megasus is an entirely different animal (pun!), resembling something closer to High On Fire than Boredoms. The Providence band self-released their self-titled debut earlier this year in a limited-to-200 LP pressing, selling out and eventually moving on to a second helping. An official CD release had never formulated until recently, when 20 Buck Spin has agreed to release the new Megasus on 11/24.

4 dudes all working for Harmonix - the video game developer who brought the world's most popular video games, Guitar Hero and Rock Band, ...decided to get together to create a metal band of wild power. Featuring long-time Providence musicians, ...the band set out to simply have fun and write killer, memorable heavy metal songs. After having two songs, "Megasus" and "Red Lottery", both featured on this debut, placed into Rock Band and Guitar Hero 2 long before this album's release the band has already created a large awareness of their music to lovers of these video games.

Dig on a track from the new Megasus LP, "Paladin Vs. Berserker", available for download above.

Lightning Bolt will be in NYC on Friday (10/30) at Above The Auto Parts Store along with Black Dice, Mick Barr, & TV Ghost. The show is one of only TWO dates in the US before the band hits Japan, Australia, and eventually the UK to play two sold out ATP shows over two weekends. The first, Nightmare Before Xmas, takes place over the first weekend in Dec and features appearances from My Bloody Valentine (who are curating), Sonic Youth, De La Soul, Fucked Up, Dirty Three, among others. "Ten Years of ATP", which is scheduled for the following weekend, features apperances from Explosions In The Sky, Tortoise, Shellac, Melvins, sunn O))) (who will be playing both The Grimrobe Demos and Monoliths & Dimensions), and many many others.

Speaking of High On Fire, the Oakland trio hits Hammerstein over two nights with Mastdon, Converge, and Dethklok. Tickets are still available for the 10/29 show (here) but 10/30 is sold out. Must. Go.

All Lightning Bolt tour dates and a Megasus video from Rock Band (!) are below...