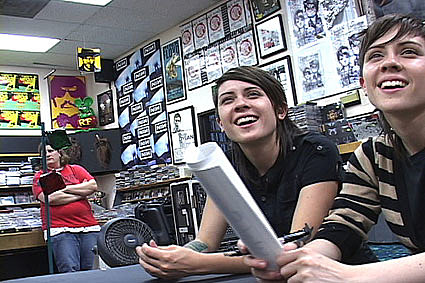 Turn it up - Robots in Disguise
I just love these guys so much. I've been listening to them for 4 years now and I love everything they have ever put out. They are wicked weird.

Challengers - The New Pornographers
A more mellow record from one of my favourite bands, but I love every song,
especially this one and Go Places. So worth owning.

Music is my hot, hot sex - CSS
I love this record. Gets me very excited to play. I have it on our playlist for before we go on stage.

Starts with One - Shiny Toy Guns
I saw a live performance of this song on MTV in Canada and I just loved the song. I really love the record as well.

On my way back home again - Jim Ward
I think Jim is a genius. I love Sparta, I was a huge fan of At The Drive In as well...but this EP is my favourite thing to come out of this man to date. Brilliant.

Challengers - The New Pornographers
This is a great record. I listened to it in my bunk in Europe this summer night after night. My favourite lyric is " no matter the mess you are, you're mine okay". Breaks my heart.

Jim Ward - Quiet EP
I honestly believe Jim is a genius. His voice gives me goose bumps. "I find it hard to turn you off when you're not here". Probably sums up my past love addict behaviour better than even I could.

The National - Boxer
I love every song on this record. I was so late on the National. I feel intense guilt about this. I intend on being a super fan to make up for it.

The Blow - Paper Television
True Affection and Parentheses are two of my favourites off this record. Genius. Sweet in a way I can't ever possibly be. I listen and pretend I'm someone different.

Northern State - Can I Keep This Pen?
We've been touring around North America with Northern State for months now. I asked them to tour with us specifically because I think this record is so important. I think they are 3 of the most talented women in our business. They put on a great show and they made one of the strongest offerings of 07 in my humble opinion.

Bonde do Role - With Lazers
I saw a special on these guys up in Canada. They have great energy and I think this is an amazing first record.

Against Me - New Wave
I am a huge stalker-fan of this band. I love this record. Not just because I sang on it and Butch Vig produced, but because I think Tom is an amazing writer. One of a kind. He's going to change our generation.

Bat For Lashes - Fur and Gold
This record haunted me this summer. The song Prescilla would get stuck in my head for days on end. It drove me absolutely nuts. In a good way.

The Killers - Sams Town
I don't know if this came out in 07. But if it didn't, it should have. I listen to this record daily.

Junior Boys - So this is goodbye
Same goes for Junior Boys so this is goodbye. I'm pretty sure I was late to this party too. But I love them. I love this record. It gives me stomach pains. It is also the record we listened to every night on the way home from the studio
when we were making The Con.

Northern State – Stubbs (Austin, Texas)
They said Mother Fucker so many times it made me cry I was laughing so hard. They worked that crowd as if it was their own and honestly those 2000 fans that were there to see Tegan and Sara converted to Northern State fans...one by one....by the end of the set it felt like we should all just go home. Genius.

Against Me - Croatian Cultural Center (Vancouver, BC)
One of my favourite shows of all time. I sang along like I was 15 and alone in my bedroom. They make me so happy.

Bus Driver - Richards on Richards (Vancouver, BC)
This totally surprised me. I was there to see Coco Rosie and I was blown off my feet. It was audio assault and I loved every second of it.

The Streets – Montreal, Quebec
I think this man is amazing. Watching him perform was a dream. I had to pull strings to get tickets. I was in town visiting Sara and found out about the shows hours before. I stood in the middle of the club and wished I was a boy...so I could be him.

Pic of Tegan & Sara via HERE.

Filed Under: Against Me!, Bat For Lashes, Best of 2007, Bonde Do Role, CSS, Tegan and Sara, The Blow, The National, The New Pornographers
Categories: MP3, Music News
Comments
Leave A Comment
Back To Top