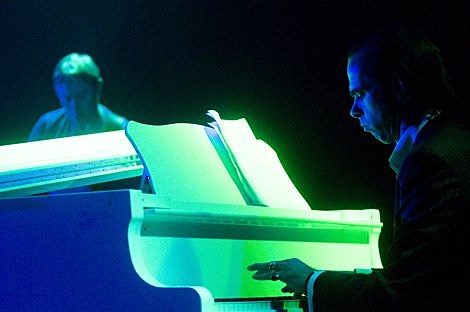 "You wake up one morning to discover that you've turned into a giant bug. It's the stuff of nightmares, unless you're Kafka's oddly placid Gregor Samsa--more concerned about being late to work than anything else. Iceland's Vesturport Theatre and its fearless director Gísli Örn Gardarsson (who made their US debut with Woyzeck at the 2008 Next Wave Festival) present a topsy-turvy stage adaptation of Metamorphosis, whose protagonist leaps, scrambles, and skitters, telegraphing his mounting despair.

The performance is a tour de force, supported by Nick Cave and Warren Ellis' delicately inflected score. The excellent cast, each member embodying the alienation and dysfunction of Kafka's unsparing tale, enhances the precariousness of the predicament as it morphs into outright cruelty. [BAM]

Metamorphosis, adapted by David Farr and Gísli Örn Gardarsson with music by Nick Cave and Warren Ellis, will make its US debut at BAM's Next Wave Festival, Nov 30--Dec 5 at BAM Harvey Theater in Brooklyn. The production premiered at Lyric Hammersmith Theatre in London in 2006.

Ticket subscriptions (a package of tickets to 4 or more shows) are on sale now. Single tickets go on sale August 30th for Friends of BAM and September 7th for everyone else.

After the December 2nd show there will be a post-performance talk with actor/director Gísli Örn Gardarsson and others from the show for ticket holders. Maybe that'll be around the time Nick Cave brings Grinderman back to NYC in support of their upcoming 2nd album.

Nick Cave & Warren Ellis released a soundtrack to The Road, via Mute, in January. Nick Cave & The Bad Seeds put some reissues in March.

Cave and Ellis previously collaborated with Vesturport Theatre on their adaptation of Woyzeck (which debuted in 2006 and was part of the 2008 Next Wave Festival). Trailers with music excepts from both shows are below...