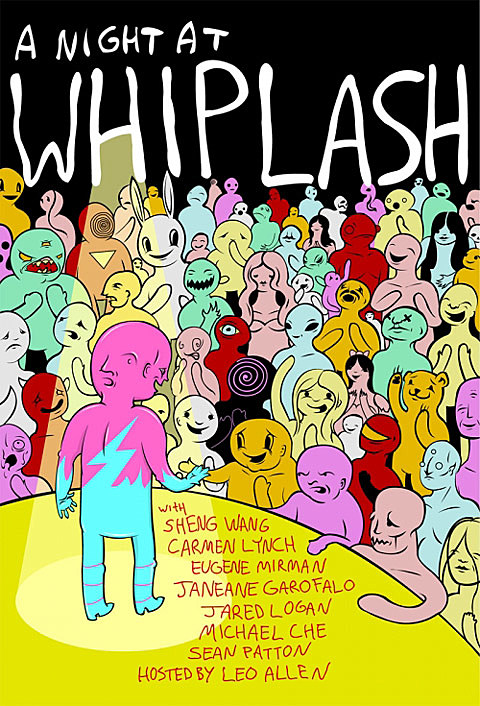 The New York City comedy landscape is peppered with tons of great recurring comedy shows. One of the heaviest hitters in the land of recurring comedy shows has got to be Whiplash. Hosted by Klaus Kinski All Time Gold Pass Favorite Leo Allen, Whiplash takes place every Monday night at 11 PM at the UCB Theater in Chelsea. Each week, Whiplash treats attendees to solid line-ups consisting of the biggest names and most promising rising stars in comedy. Big fish like Aziz Ansari (who's playing a way bigger than UCB Theater venue called Madison Square Garden), Jim Gaffigan, Zach Galifianakis, Louis CK, Chris Rock and more have graced the Whiplash stage on several occasions.

Back on September 9, 2013, Whiplash endeavored to bring the Whiplash experience to the masses by doing a live concert documentary. Welp, that sucker, titled A Night at Whiplash, is finally "in the can" as they say in Hollywood and to celebrate the fine Whiplash folks are throwing an epic release party on Friday (6/13) at The Bell House. As one would expect from a Whiplash related event, the line-up for the evening is STACKED. Attendees will thrill to host Leo Allen as he welcomes guests Jon Benjamin, Jon Glaser, Michael Che, Aparna Nancherla, Jared Logan, and a dance thingy by Monica Bill Barnes and Anna Bass. "Will there be special guests?" you ask? Well, doy, yeah, probably. Use your head kid. Anyhow, a smattering of tickets are on sale and you gotta believe me this show is going to go so far above and beyond the price of admission you won't be able to stop tweeting about it for the rest of your life.

Check out a trailer for A Night at Whiplash below...