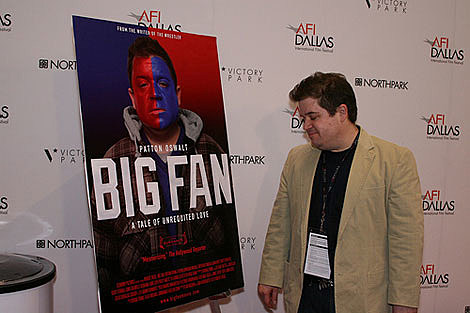 It slowly dawned on me after mentioning Patton Oswalt's participation in the upcoming New York Comedy Festival that I was neglecting a small pile of other bits of Patton Oswalt related news. To begin with, Patton is about to embark on a tour that will have him zig-zagging all over the country for the next few months. The entire schedule is below, but what you may not know is that he'll be at COMIX on August 16th. And it's only FIVE BUCKS. Yowza! He's part of a stellar line-up. Buy. Tickets. Now.

On August 25, Patton has a new live album and DVD coming out on Warner Brothers Records (no more Sub Pop?). It is entitled My Weakness is Strong! and features an hour of new material. The CD is pretty straightforward and contains the full hour long performance. The DVD, however, contains the full hour long performance as well as bonus features including some short films and more! Watch the trailer below.

I mentioned Patton's starring role in the film Big Fan a while back. Be advised that it is opening at the Angelika Film Center on August 28th. But if you're feeling antsy, you can catch the film followed by a Q&A with writer/director Robert Siegel and actor Kevin Corrigan at the 6:30pm screening on August 26th at Planet Hollywood (1540 Broadway, NYC). There's also an 8:30pm screening that night, sans Q&A.

All dates and tickets and videos below...