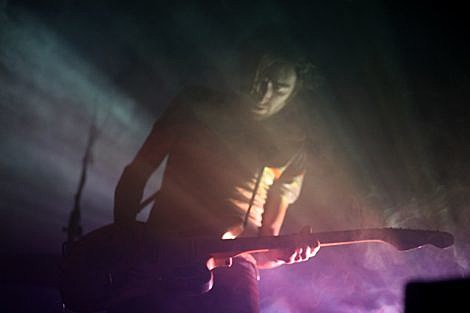 Earplugs are now close-to-officially required for the previously discussed Chapterhouse show at LPR on 10/4, as A Place to Bury Strangers have been added to the already impressive lineup that includes support from Ulrich Schnauss and Soundpool. Tickets, if you haven't bought them already, are still available.

The show is one of two Chapterhouse/Ulrich Schnauss dates that NYC gets in the coming days, with the first being at the Bell House on 10/3 with Dead Leaf Echo (tickets).

The show isn't the lone NYC date for APTBS either. The band will also play their native Death By Audio on 10/26 with Japandroids, as well as a Billboard showcase at Gramercy Theatre on November 3rd (no tickets for that yet).

Speaking of remixes, guitarist/vocalist Oliver Ackermann has been busy on the remix front as well, logging remixes for Maps' "Die Happy Die Smiling" and School Of Seven Bells' "Windstorm" in the recent past. Ackermann also has another remix due of Grinderman's "Worm Tamer" (out 11/22), in addition to a forthcoming remix for Holy Fuck.

The band is also hosting a contest for a video for "Deadbeat". Details on how to enter, tour dates and that "I Lived My Life To Stand In The Shadow of Your Heart" video are all below.

A Place To Bury Strangers: "I Lived My Life To Stand In The Shadow Of Your Heart"

A Place To Bury Strangers want you to put all of that energy and angst you feel when you are watching them perform or listening to one of their cds into an OFFICIAL video for the band!

Listen to 'Dead Beat" (below) and then make a video and upload it to youtube.com/APTBSGROUP.

Winners will receive credit for the OFFICIAL video and it will be posted on ALL of the band's sites (Myspace, Facebook, Twitter, Youtube...etc) as well as a signed boxset and 4 tickets to a show of their choice.

A Place To Bury Strangers - Deadbeat