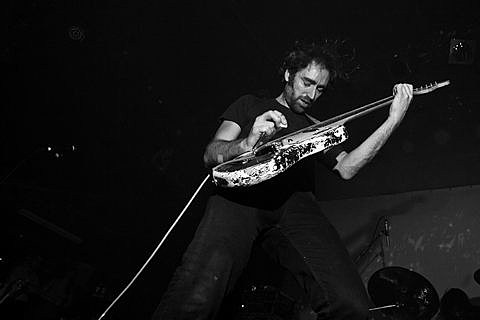 Noisy Brooklyn shoegazers A Place to Bury Strangers have a number of international dates coming up, including a Taiwan festival in early August and a European tour in September-November. But in between that, they'll play a tiny show at their hometown stomping grounds Death by Audio on August 22. It's always a great to see APTBS back at DbA (like we did in December) when many of their shows now happen at larger places like Music Hall of Williamsburg, but this one's especially great because it's an all-killer bill of Philly noisemakers Bleeding Rainbow (who have toured with APTBS), Northampton indie rockers Potty Mouth, and Brooklyn indie rockers Shark? (who are labelmates with Potty Mouth and played Shea with them last night [7/25]). Admission for the show is $10 at the door.

All APTBS dates are listed, along with some videos, below...

A Place to Bury Strangers - "You Are The One"