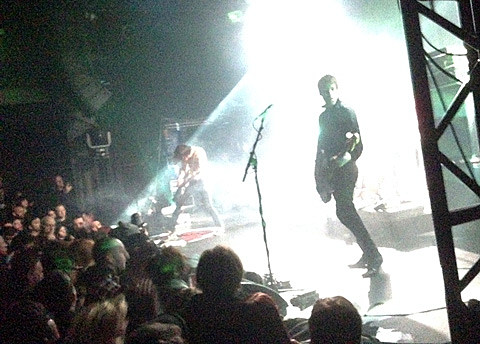 A Place to Bury Strangers' new album Transfixiation is out this week and they've just released a video for "We've Come So Far." The video was filmed live at Death by Audio on November 22, which was both the last night of the DIY venue and APTBS' frontman (and DBA co-owner) Oliver Ackermann's birthday. The video was directed by his DbA co-owner Matt Conboy. Says Ollie:

The fact that we were losing our home [Death By Audio], that it was the last show and APTBS were playing seemed like too good of an opportunity to turn down. We filmed their set and I felt like we were able to capture the spirit of that moment: this weird, dark form of celebration and catharsis. By the end of the night I think everybody felt like they really got something out of their system.

Last night A Place to Bury Strangers celebrated Transfixiation's release, a few blocks from DbA's address, at Music Hall of Williamsburg, which was their typically awesome sensory overload of strobes, smoke machines, projections and white noise. For their encore, they played a down-and-dirty set on the floor by the sound booth. Cool show. It was the kickoff to their tour and all dates are listed below.

Also celebrating a new album was Grooms, who also played DbA's final night and whose great new album Comb the Feelings Through Your Hair (the last album recorded at Death by By Audio) is also out this week. Playing as a three-piece, the new songs sounded great: Steve Levine is a hell of a drummer (in addition to being a funny guy) and Jay Heiselmann used a variety of effects to make his guitar sound like keyboards (the new album takes Grooms into new territory), leaving most of the more normal guitar parts to frontman Travis Johnson.

Opening the night was Baltimore's fun Ed Schrader's Music Beat, who are on the first leg of APTBS' tour. If you follow Ed on Instagram, you know he has an obsession with Frasier, and the band's new tour t-shirts mimic the sitcom's logo, but with Baltimore's skyline in place of Seattle's. You can buy them online too.

All APTBS tour dates are listed, along with the "We've Come So Far" video, below...