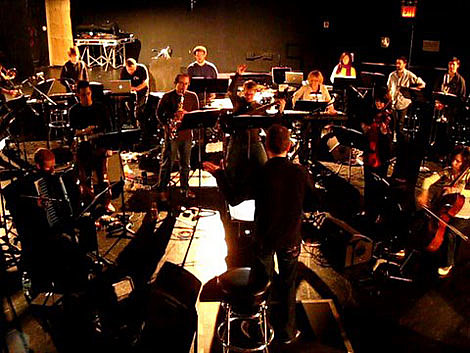 For over an hour on Wednesday, April 21st, downtown space (Le) Poisson Rouge roared with the sound of Michael Gordon's Trance . Signal's performance was its debut of the work, the first of any group outside UK's Icebreaker, but it won't be Signal's last. Trance is on the schedule for the Bang on a Can Marathon on May 31st. Other acts at the fest include Ryuichi Sakamoto with Bill Frisell, Tortoise, and more.

At LPR, the 22-piece band set up in the middle of the floor. Electric guitar and bass sat centerstage -- and those two familiar rock signatures weighted the piece, signaling its shift in movements and tones with their repeating figures. In particular, the three-note electric bass pattern that starts Trance becomes intimately familiar as the work goes on and provides a through-thread of sorts for the listener (especially one attuned to rock).

It's not impossible to paint your own narrative on Trance, as its dominanant thrust shifts between bass guitar, brass, woodwind, and percussion. A sort of musical fencing match emerges, with each rhythmic component opening and closing to let another expand in its place. In the cracks of each pulse, a section across the room comes through, usually seeming to lag slightly behind.

One dialogue, between the reeds and the center sax (rocking back and forth as if in a trance himself), was particularly engaging. For a while, that group held the floor while other sections maintained side conversations, only apparent in the preeminent instruments' pauses.

In the cozy space of LPR, Trace seemed to confront each listener at different times. Parts of the piece will scare the shit out of you. Unannounced drums early on set the expectations for volume, which get continually torn down and built up again as Trance progresses. Its pre-finale lull cuts the pace to a meditative drone, before the musicians build to an inevitable, gratifying climax. Conductor Brad Lubman almost jumped out of his Jack Purcells as he cued the piece's cresting volume. It's always a pleasant surprise when an extended, nearly-hourlong piece of music leaves you wanting more.

As mentioned above, Trance will be performed again at the Bang on a Can Marathon on May 31st. Its composer, Michael Gordon, also happens to be one of the festival's three founders/artistic directors. We talked with him about revisiting the 15-year-old composition and his personal top picks for the BoC festival...

How will the piece change from (Le) Poisson Rouge to the Bang on a Can Marathon?

Michael Gordon: It'll be a whole different space, and I think it'll be a really good up close and intimate performance coming up. I think the feeling was that once the effort was put in to put this big thing together, it's worth doing more than once.

Is it strange to be revisiting a piece you wrote over a decade ago?

It's a good question. I mean, I don't know if I'm revisiting it. What's really interesting is it's kind of moving to another group now. The British group Icebreaker, they still play it, and they've been playing it nonstop. It's been choreographed to, and they tour with it. But I think it's such a big undertaking that it's interesting to see it move over into another group, and especially to this great group of musicians. Signal are kind of the go-to people here in New York to play a piece like this. Really jagged rhythms, a lot of coordination. The piece is almost written like there's three different bands playing together, so seeing that happen is really a great process.

As an artistic director of the Bang on a Can Festival, you get your pick as far as who plays. Who are you especially looking forward to at this year's marathon?

One of the highlights for me is going to be this Danish vocal group [Ars Nova Copenhagen]. There are twelve singers and the conductor is Paul Hillier, who himself is a really amazing singer and conductor. I think voices are going to sound really great in the Winter Garden, so I'm looking forward to hearing that. I'm really happy Tortoise is coming. We've been asking them every year, for the last ten years or something, so they finally said yes.

Tortoise will also play another NYC show while they're here, on May 30th at the Bell House.

The latest Bang on a Can Marathon info is HERE.