the line outside Other Music at RSD 2013 (via @brooklynvegan instagram) 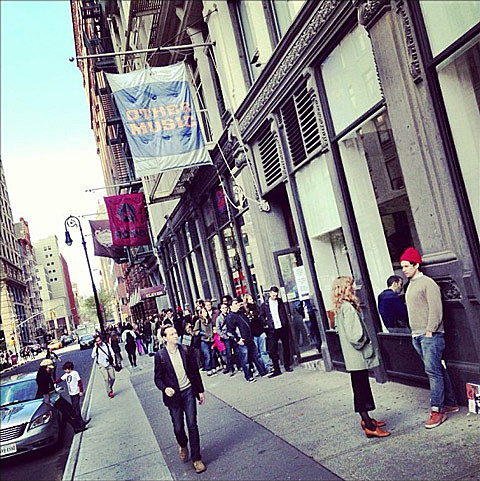 We're just a few days away from Record Store Day 2014 (April 19) and quite a few of NYC's record stores have special events planned in addition to carrying all the RSD exclusive titles (check out our picks of the top releases). Here's a rundown.

The biggest in-store, probably no surprise, is at Rough Trade which will open at 9 AM and has a full day of musical performances. Hospitality and Perfect Pussy have now been added to the already announced line-up of Amen Dunes, Betty Who, Fear of Men, Mark Mulcahy, Milagres, Nothing, Palehound, and The Rails. There will be DJs too, and they've already announced which RSD exclusive releases they'll have for sale. Band schedule below.

Generation Records in the Village also has a full day of in-stores. The store opens at 10 AM, and performers include Pour The Pirate Sherry, The Golden Grass, and Daddy Long Legs, plus DJ sets from Aaron Cometbus, Doug Gillard, Mr. Fine Wine of Downtown Soulville on WFMU, Zachary Lipez and more.

Other Music, which will turn 20 next year, will open at 10 AM for RSD. It doesn't quite have the room for in-store performances and shopping at the same time (like at Rough Trade), so they have up to this point just booked musicians as DJs. This year's line-up, though, they are doing one actual live performance, with outsider artist Lonnie Holley at 1 PM. The rest of the day is DJs and the lineup includes Pop. 1280, Com Truise, Xeno & Oaklander, Matana Roberts, Pete Swanson and more. Full schedule is listed below.

Over at Kim's Video, the store is opening early at 8 AM with "refreshments" and their own slate of DJs, including Mick Collins of the Dirtbombs, plus members of Psychic Ills, Prince Rupert's Drops, and more. Full Kim's RSD schedule below. 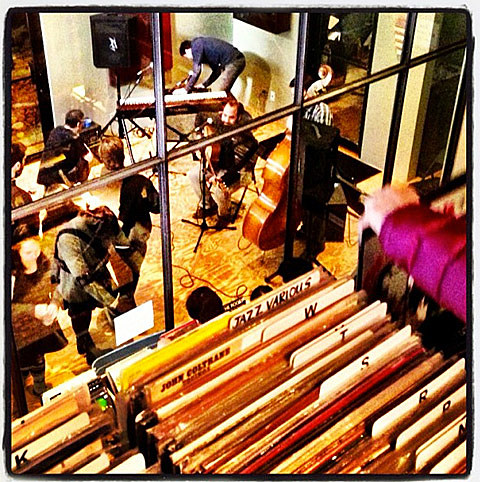 Around the block, In Living Stereo will open at 10 AM and have in-store performances from Chaos Chaos, Call of the Wild, and Balancer. Plus, there will be free PBR all day (ID required) and if you spend more than $100 you get a free In Living Stereo beer mug.

East Village store Turntable Lab will be open from 10 AM - 8 PM with a healthy stock of RSD14 titles and guest DJs including Aaron DRM, Alex from Tokyo, Sable, Blue Jemz, Dopeshoes, and more. Full DJ lineup is in a flyer below.

Good Records in the East Village will cary a few RSD exclusives and will be putting out a special batch of vintage vinyl just for the day. They'll be posting a list of what's in that batch on their Facebook at some point.

Greenpoint's Permanent Records will be open at 10 AM with lots of RSD exclusives, plus "plenty of fun gifts and other swag to give away to our first batch of shoppers."

At the new Academy Annex location at 85 Oak St. in Greenpoint, in addition to RSD titles they'll be putting out "a great collection of used rare '90s and '00s indie rock, punk, and a ton of classic titles."

Nearby at the Captured Tracks Shop, they'll have "a bulk of RSD-exclusive titles, including RSD-exclusive titles from Captured Tracks!" Those C/T RSD titles include a live Medicine album, and a cool Flying Nun double-pack 7" with The Chills, The Verlaines and more. Not a RSD thing, but the store will be debuting monthly artist-curated record booths, the first two of which will be from Jeremy and Jarvis from Woods and Mac DeMarco. The store opens at a 11 AM for Record Store Day and will be open until 9 PM.

Bushwick's The Crate -- the storefront for Wrecords By Monkey which makes jewelry, accessories and home products out of old vinyl records -- will have it's Grand Opening on RSD, with $1 used records and new titles from local artists, plus free beer, and DJ sets from APSPDR+ and Silent Rider. 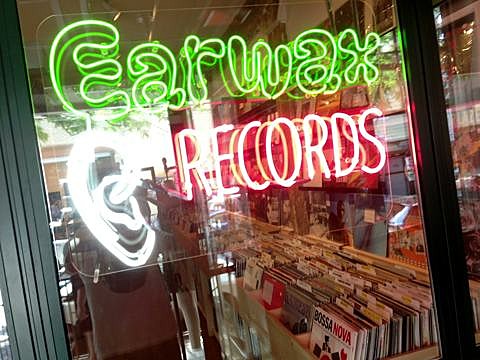 Earwax Records, in its new N. 9th location in Williamsburg, will be open at 10 AM with a selection of RSD exclusives.

Norman's Sound & Vision, which moved from the East Village to Williamsburg a couple years ago, will have RSD exclusives and is open at 9 AM.

The Record Grouch in Greenpoint will be open regular hours (noon - 8 PM) and, while they won't be carrying any RSD exclusives, they have a stockpile of $1 records they've been holding onto just for the occasion.

Co-op 87 in Greenpoint may or may not be doing their 24-hour RSD marathon this year (they haven't decided yet) but will carry a select batch of independent label RSD exclusives as well as a whole bunch of $1 records they've been hoarding.

Halcyon Records in DUMBO has their biggest selection of RSD exclusives yet. They'll be open at 10 AM.

In the greater NY area, Fords, NJ's great Vintage Vinyl will be open at 8 AM for Record Store Day and are carrying around 300 RSD exclusive titles.

Cake Shop, who has participated in RSD the last three years, is taking this year off. The cafe and venue are still open though.

If you're going to be in the Windy City on Saturday, BV Chicago and Saki Records are teaming up again for a free Record Store Day party with live performances from Their / They're There/ ,Wedding Dress, Minor Characters, Landmarks, Meat Wave and Negative Scanner.

Please note that these stores are open year-round and need your support. In-store schedules and RSD14 flyers below... 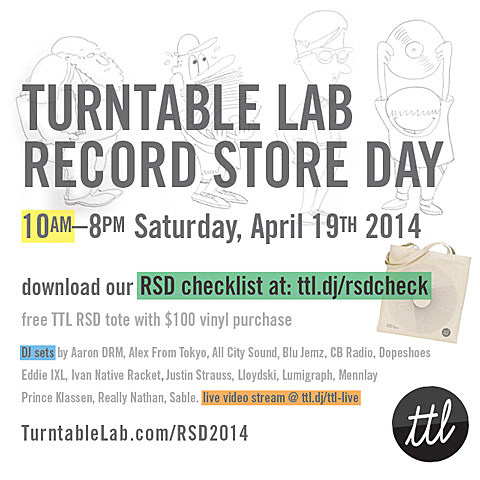