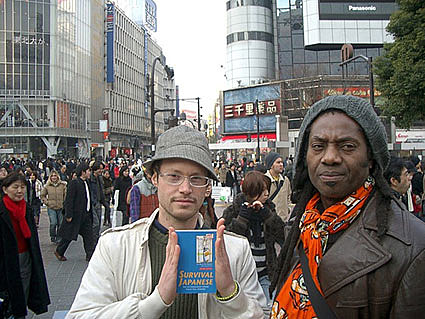 Martin Perna stopped by the "Martín Perna (Antibalas/TVOTR) calls VOICE cover racist" post to respond to the 91 heated comments already there. Here is what he wrote: 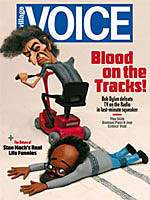 NOTE: This is a letter from Martin Perna, the original author of the letter to Village Voice regarding the cover with Bob Dylan and Kyp Malone of TV on the Radio.

The question should not be why do I see this cover as racist, but why most of you do not.

I felt the need to respond to the cover, and also to all the responses for several reasons, listed below:

My peoples (Italians/Mexicans/Sicilians/Irish) have all been lynched in American and have a long history of portrayed by white media as less-than white, less than human. Whites lynched Sicilians and Italians by the dozens (check the documentary “Linciati”) in the early part of this century, and were subject to cartoons as ugly as this worse. Mexicans, more visible than ever, bear much of brunt of such hateful imagery and treatment today.

I count myself among handful of Italian-Americans in post-WWII America who have held on to our full heritage and resist the temptation to step into the reprehensible comfort of white privilege. Have I ever received privilege on the lightness of my skin? Of course. Have I confronted this and recognized that this privilege is unjustified? Yes. This letter is just one tiny part of my daily process to recognize this and dismantle white supremacy.

I can confidently say that neither Dylan nor TVOTR--give a damn about winning or losing, This discussion is hardly about that. It's about the horror of being represented in a seemingly innocent but stupid and hurtful manner by people who think they are being clever, then seeing an entire mass of ignorant people jump to their defense rather than taking this as an opportunity to look into themselves, to learn, heal, study and evolve.

Racism exists whether it is intentional or not. My letter was not calling the Voice racist in the same way that the Ku Klux Klan is racist. That would be truly ridiculous. This however, is how many of the readers interpreted it. Most white folks don't believe themselves to be racist because they don't actively or intentionally do racist things, like lynch people, burn crosses, or become members of explicitly racist institutions. However, these same people who call themselves colorblind do nothing to address the systemic and historical racism that is very much alive in the present.

When latent racism is identified in something whites say, do, (or something they are a part of) they will immediately go on the defensive. There are plenty of examples of this on this blog and dozens of others on the Internet a la “I’m very race conscious, but I saw nothing wrong with this…”

Racism is about power, visible and invisible. Therefore, people of color can be prejudiced, but not racist, because there are not systems of power (banks, police, governments, media) at their disposal to give real world power to these prejudices. White people are not routinely and indiscriminately beaten and shot crossing the border from Mexico. Police do not routinely and indiscriminately mistake a candy bar or wallet for a gun in the hand of a white person and gun them down.

Do some people of color say stupid ignorant things about whites and other people of color? All the time. Is it right or justified? No. But it is not and will never be the same because it does not have the same material effect in the world. It is the other side of the sickness of racism and illustrates how everyone suffers. White people, however have never (except in isolated incidents) been victims of the same racial terror that people of color continue to be subjected to as I write this post.

For all the "can't we all be color-blind?" folks: Equality is not about sameness. We are all different, all unique. Equality is about justice. It is about recognizing that from day one in this former British colony that it was set up so that white people would eternally run the show, and because of attitudes like many of yours, not a damn thing has changed.

The same people who saw no racism at all and got uptight and defensive are the same people who refuse to confront white privilege. Until they learn how to acknowledge this and commit themselves to dismantling it, this country (and world) will never reach its potential and will never have peace.

You don't have to like me. You don't have to like any of the music that I am involved in. But you must take these words to heart, because it is much much deeper than indie-rock, a music poll, a cartoon, or a downtown NYC weekly newspaper. Please have the courage to look deeper into yourselves.

You are all in my prayers.

PS: A highly relevant book for all people (white and of color) to read: The Possessive Investment in Whiteness, by George Lipsitz.

PPS: Also note that in the full text of my letter, I noted that Dylan was also portrayed in a nasty way, but since I don't know him personally, and because my letter was already long enough (the Voice cut it down some), I didn't go into details about the ugliness of the rendition of Dylan’s age or Jewishness, with the hook-nose, old folks scooter, etc.