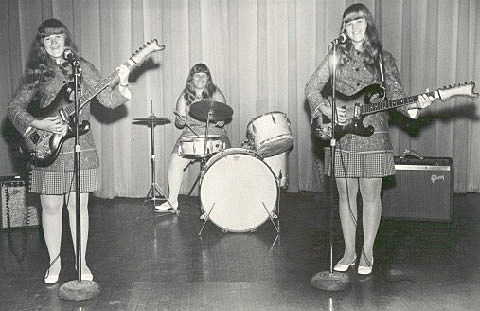 "The band is primarily notable today for their perceived ineptitude at playing conventional rock music; the band was described in one Rolling Stone article as "...sounding like lobotomized Trapp Family singers." As the obscure LP achieved recognition among collectors, the band was praised for their raw, intuitive composition style and lyrical honesty. Philosophy of the World was lauded as a work of art brut, and was later reissued, followed by a compilation album, Shaggs' Own Thing, in 1982. The Shaggs are now seen as a groundbreaking outsider music group, receiving praise from mainstream artists such as Kurt Cobain and Frank Zappa." [Wikipedia]

A musical based on '60s girl-rock oddities the Shaggs will be coming to Playwrights Horizons on 42nd St in NYC in spring 2011. The show, written by Joy Gregory and Gunnar Madsen, premiered in LA in 2003 and played in NYC during the NY Musical Theater Festival in 2005. The new production will be co-produced by New York Theater Workshop.

More info on "The Shaggs: Philosophy of the World" at the NY Times, and videos are posted below...

The Shaggs "My Pal Foot Foot"

The Shaggs performing Who Are Parents?