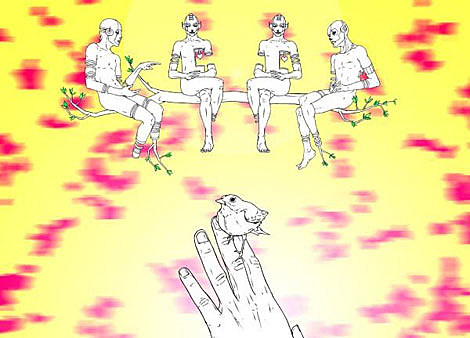 Showpaper, "the volunteer-run, free, and one-of-a-kind 'DIY' newsprint of concert, art, and film listings," is hosting a benefit for itself on Saturday, September 26th (7pm) at Kidd Yellin Gallery (133 Imlay St in Red Hook, Brooklyn).

The excellent musical lineup includes Your Nature, The Trachtenburg Family Slideshow Players, Shilpa Ray, Rebecca Schiffman, Sarah & Michelle Cagianese, and Kendrick Strauch. Kendrick is the keyboard player of the now-broken-up Harlem Shakes. Earlier this year, before the Shakes left for tour with Passion Pit in May, Kendrick spent two days recording a cover version of the entirety of Yeah Yeah Yeahs' Fever to Tell. All he used was "a beat-up piano and a dinky drum machine".

"So Fever to Tell by the Yeah Yeah Yeahs is the best album to have sex to of all time. I can't play drums, I can't play guitar, and I'm not a banshee of a girl. But I wanted to cover it because I like it, and because I wanted to win a bet. So here is my impressionistic, masturbatory act of devotion. I recorded it in a noisy rehearsal studio with whatever was laying around. I only had two weekend days and a case of Sparks (which I supplemented with a bottle of Old Granddad Sunday) before I was leaving town, so now I know what my inebriated intuition sounds like. So I hope you like this Christmas Card to the Yeah Yeah Yeahs. Listen to the songs I put up, if you like them, I put a sendspace link where you can download the whole album" - Kendrick

Check it out above.

In addition to the music, there'll be artwork from Gibby Haynes of Butthole Surfers, covers of the paper and other art and photos on display. A flyer and more info are below... 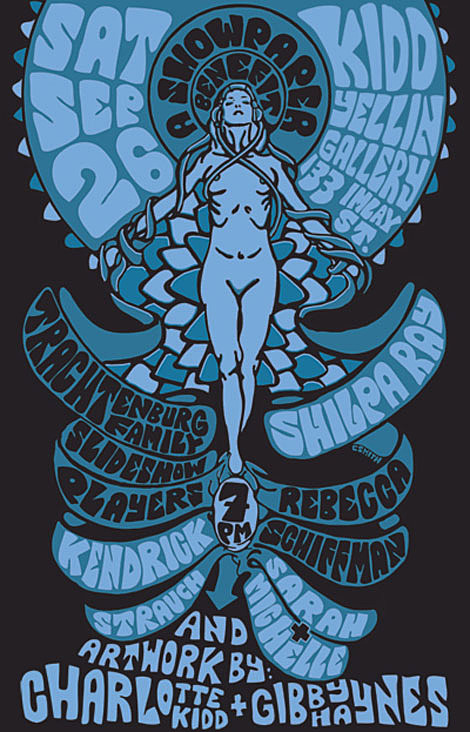 :: and special guests of music and art...

This benefit will immerse its audience in a multimedia blend of art, music and film--just as ShowPaper does. The event will reach out to an extended new audience of art enthusiasts while preserving the intimate feel of a typical ShowPaper underground event. Artwork by Kidd Yellin resident artists and special guest art curation will be on exhibit along with a projected, rotating "virtual gallery" of ShowPaper cover art--with works by artists (often with music ties) such as Raymond Pettibon, Bjorn Copeland (Black Dice), Ben Jones (PaperRad), Chris Johanson, Ed Templeton, Mark Mothersbaugh (DEVO), Brian Chippendale (Lightning Bolt), and many other talents. Music videos will be screened between sets, including film from past ShowPaper concerts. The event will truly represent a colorful spectrum of subculture.

ShowPaper is known for raw, no-frills, and affordable underground shows (that support its bi-monthly publication) where art is valued above hype. ShowPaper is brought to life by the front-running tastemakers of the NYC music scene, who first introduced such artists as Vivian Girls, Matt and Kim, Dirty Projectors, Dan Deacon,and Vampire Weekend, and who are relied on by countless young people for their next taste of great and interesting music to be experienced up-close-and-personal. With a circulation of 10,000, ShowPaper is the only publication in the tri-state area to exclusively list all-ages shows, distributed and propagated by a small army of dedicated volunteers. A hub of creative-minded people, it is a community founded on inclusion, meant to inspire the next generation of tastemakers, artists, and musicians. ShowPaper's poster-sized cover art makes brilliant work by emerging artists accessible, and the offbeat and hilarious horoscopes, classic indie rock dating sidebar, "I Saw U," and, of course, music listings, make it a coveted item; ShowPaper is known to quite a few and loved by those who do.