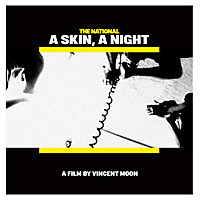 A SKIN, A NIGHT
A FILM BY VINCENT MOON

A Skin, A Night is a film about THE NATIONAL made by French filmmaker Vincent Moon.
It will be released on DVD by Beggars Banquet on May 20th and will be packaged with a bonus cd, The Virginia EP.

What goes on in A Skin, A Night, though, is not the stuff of well-rehearsed insider history. Nor is it a series of rock'n'roll clichés. Nor is it specifically concerned with the making of The National's fourth full-length album, Boxer, even though much of it was filmed during sessions for that record at Peter Katis's Bridgeport, Connecticut studio. A Skin, A Night is less a movie about The National than a movie about how music is made today -- not with classic rock bravado, or debauched indulgence, but through novelistic attention to detail, a collective implosion of personality, and worried worried nights.

When the association between Vincent and The National began, he wasn't yet known as the auteur behind Le Blogotheque's Les Concerts A Emporter aka The Take Away Shows. It was well before his tenure as image maker for R.E.M and Arcade Fire. And The National had yet to become one of the most beloved of the current crop of independent rock band.

A Skin, A Night is a sixty-minute portrait of impressions, mutual affection, and intimate moments you'd never otherwise see. If The National's lyrics seem to take us inside the human condition, Vincent Moon's images take us outside, documenting the beauty of the sounds made by our human skin.

A Skin, A Night will be packaged with The Virginia EP, which contains 12 tracks of demos, live versions, radio sessions and b-sides.

The National is going on tour with R.E.M. and Modest Mouse. Tickets for those shows are on sale.

Vincent Moon also makes videos for La Blogoteque - the French music blog behind the famous Take Away Shows (like R.E.M. for instance).