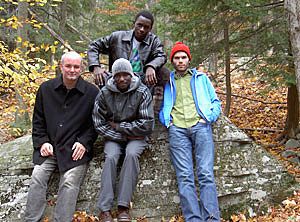 Warning: "World Music" contained in the MP3 above

Obama" is Extra Golden's song of praise for the Senator from Illinois and everyone else who helped them unite in the US last fall for a debut tour and the recording of this album, the follow up to their debut, Ok-Oyot System. Such songs of praise are benga tradition.

"Ok-Oyot System" loosely translated as "It's Not Easy", and that was definitely the case when Extra Golden's Kenyan members sought visas to enter the US last fall. It was largely thanks to help from Obama and his office that Opiyo Bilongo and Onyango Wuod Omari were able at the very last minute to get their visas and make their first trip outside of east Africa.

Extra Golden is the bi-continental collaboration of Ian Eagleson, Alex Minoff (both formerly of DC-area band Golden), Opiyo Bilongo and Onyango Wuod Omari. The band's sound, as it's lineup would suggest, is an innovative combination of East African Benga, the guitar-driven dance pop style very popular in Kenya, and American boogie rock. But unlike plenty of other arbitrary African and American amalgamations, Extra Golden's sound is fully integrated, a union that transcends the very notion of authenticity.

Hera Ma Nono will be out October 9th.

No tour dates at the moment.