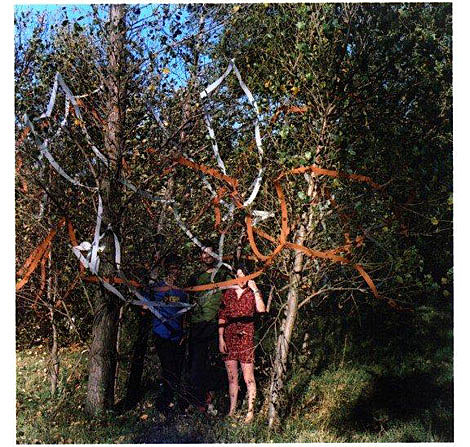 The Luyas are one of my favorite bands in Montreal. Their music, a collaboration of guitar, drums, melodica, and french horn, reminds me of that classic early 90's college rock sound, but turned on its head - an intoxicating combination of unsettling and comforting.

And what would a Montreal band be without other bands to take up their time? The members of the Luyas comprise some of the best and exciting music in this city, with Jessie Stein also pulling duty in Miracle Fortress and Adam and the Amethysts, and Stefan Schneider and Pietro Amato playing in Bell Orchestre with Pietro also pulling duty for Torngat.

We spoke with frontwoman Jessie Stein about the formation of the band, their sound, and skinny dipping.

How/when did you guys get together?

Jessie: The Luyas formed in the last days of 2006 for kicks because we were friends and wanted to play weird pop songs. Pietro and I had known each other for awhile and I had just returned to my hometown of Montreal after prolonged stints living in other cities. I hadn't been playing in any bands for a few months. It was a pretty dismal time in my life and Pietro and Stef were pretty awesome to find musical sanctuary in, I guess. Things only got better.

How would you describe your sound?

I probably wouldn't describe our sound, but if I had to come to terms with the fact that we had a sound and was pressed to talk about it, I would probably say that we write songs and and then arrange them with all our weird voices and instruments to suit them. I think it comes across like we're playing songs we learned a long time ago but that we remember only hazily with tons of weird inaccuracy. And we're all playing the wrong instruments. I'm making it sound like I mean that we sound like Alzheimer's, but that's not really it. We play songs.

I had trouble coming up with a specific description. All I could think of was the early 90s college sound. A sort of reinvention of the quiet-loud dynamic. What do you think?

I'd say there are elements of that especially in our oldest songs. There are some tribute to Eric's Trip moments for sure. But I think that the stronger material is the less nostalgic stuff. I think our new record is going to be pretty far from that I hope.

How far along is the new record?

We're still writing. We're going to start recording [this month] and release a 12" with 2 new songs on it in the fall with Phi (a new artist support company in Montreal) and then we plan on being in pre-production mode and recording a full new album in December/January to release hopefully in the spring

How do you guys find time to dedicate your energies to The Luyas when everyone is in separate projects as well?

It is a total juggling act. It is really hard sometimes. I think ultimately it gives us deeper musical vocabularies but maybe makes it more of an effort to keep musical kinship. The Luyas is far and away the most natural group I have ever played in. We fit pretty well into each other's sensibilities without much tailoring, which makes that part of things easier. The biggest nightmare about us all being in a million other bands is...having to be patient, as we each work on our other bands.

Does the record have a national or North American distributor?

The record is released in Canada on my record label, Pome Records, and we have distribution in Canada with Fusion III, which is great.

Could you give me a funny story related to the band?

I'm not going to answer this one because anything funny that's happened that could be told as a story is strictly a secret in the most secret Luyas vault. We're weirder than we are funny, and we laugh more than we tell jokes. We threaten to leave each other at gas stations, but we bail each other out when we're going to go to jail if we don't pay our tickets that we got skinny dipping in public pools in the wee hours. It's hard to explain.

The Luyas will be playing Pop Montreal as part of the Pome Records showcase at Casa Del Popolo on October 4th,