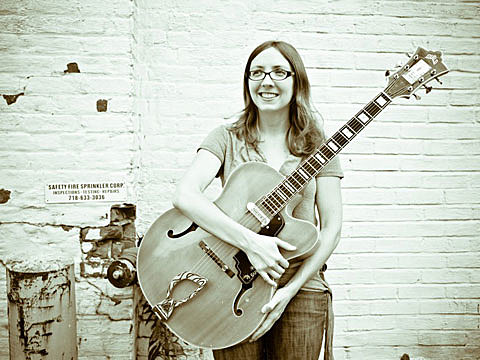 Mary Halvorson's sound is a hyena, sharp and active. Historically, the classic jazz guitar tone and reputation is closer to a basset hound. 9 out of 10 dentists prefer the one who's out for blood. Standing out from the pack, Halvorson's strings cut with beauty and precision. Her melodies are hooky and complex at the same time, no small feat, and her talent for improvising with her hand picked ensemble is one to be seen to be believed. There is a fluidness to her style, and it is all in the art of juxtaposition. She is jagged but defined, aggressive but beautiful.

On Thursday, January 13th, she's performing at Littlefield in Brooklyn in a collaborative trio with improvisers Weasel Walter on the drums and Peter Evans on the trumpet. This double whammy show pairs Halvorson's crew with Mostly Other People Do The Killing, an gloriously titled high energy group (sharing Evans on the trumpet and Talibam!'s Kevin Shea on drums), smashing jazz aesthetics with subtle and not so subtle humor and phenomenal talent. Don't miss it.

The Littlefield show is a record release party for the trio's new record, Electric Fruit, out January 25th via Thirsty Ear. It will be Mary's first release in 2011. She lists nine that came out in 2010. Those include the notable Mary Halvorson Quintet album, Saturn Sings, which was released via Firehouse 12.

Mary can also be found tonight, January 12th, playing with Marc Ribot at Le Poisson Rouge. A video and all of her tour dates can be found below...