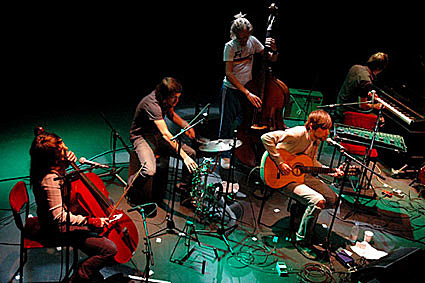 When I was offered the opportunity to do a monthly spotlight on a band that I think deserves to be heard, I knew immediately who I would present. A couple months back, I was youtubin' and stumbled on a video from a Swedish band that combined gentle acoustic folk with an electronic pulse that's hella addictive, and of the 4500 views since Auguest 20th, 2006(!), I have to be responsible for at least a hundred of them...

Melpo Mene is the brainchild of Erik Mattiason, who has been writing music since 12. Speaking with him, he told me,

I was influenced by Nirvana and i wrote three songs a day and the songs were probobly not so good but i'd like to think they were a little bit better than what the average teenager playing guitar infront of the mirror wrote.

He signed with Imperial Recordings in 2003 and has been releasing a steady flow of e.p's and albums since. Imperial Recordings is also the Swedish home of Jose Gonzalez. Melpo Mene's sound recalls early Iron and Wine, but with that inflected pop sound that the Swedes seem to have perfected.

Unfortunately, physical copies of their albums are unavailable in North America, but the 2004 album Holes has just been made available on iTunes, and they're working on a new album called Bring Out The Lions that should be on iTunes in the Spring. However, Erik also informed me that, "a song from the coming album will be used in a big commercial in the US so that might be our ticket" to a record deal.

Melpo Mene - Good With The Mothers

Look out for Melpo Mene at SXSW this year.